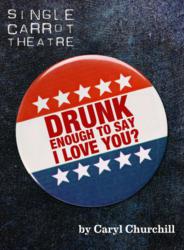 Drunk Enough to Say I Love You? by Caryl Churchill

BALTIMORE, MD- September 25, 2012 Single Carrot Theatre is thrilled to announce that Drunk Enough to Say I Love You by Caryl Churchill will perform on MICA’s campus from October 5th - October 21st at Falvey Hall in the Brown Center (1301 W. Mount Royal Ave Baltimore MD 21217) and at the new auditorium in Studio Center (113 W. North Ave Baltimore MD 21201). Opening night on October 5th will be held at MICA’s Falvey Hall with show time at 8:00pm.

In order to accommodate the change of venue show times have been pushed back to allow patrons ample time to locate the new venue. Evening performances will now play at 8:00pm and Sunday performances will play 5:00pm

Though this was not a previously anticipated transition, Single Carrot Theatre is excited have this unique opportunity to think outside of the proverbial box. As always, pushing the artistic envelope remains a vital portion of the vision of Single Carrot Theatre and the company welcomes the challenge. “We have experienced a tremendous amount of support from the community, and for that we are extremely grateful. With every challenge lies new opportunities and the organization remains optimistic and excited about this next chapter”, says Artistic Director Nathan Cooper. Single Carrot Theatre’s Board of Directors is also excited by the change. “Performing at MICA gives us a chance to attract a wider and even more diverse audience, and we're confident that our current fans will be pleased with this space," says Board Chair Rich Espey, adding, “Transforming our space at Load of Fun into something new and different for each production is a hallmark of Single Carrot. Being at MICA is a natural extension of that. The high quality of our productions will be consistent as always." Managing Director Elliott Rauh said “Single Carrot is grateful for all the support and assistance that MICA has provided as we searched for a venue. We are thrilled to play Drunk Enough to Say I Love You? at MICA.”

For the latest information on where a specific performance is occurring, please visit the website at singlecarrot.com or call Single Carrot Theatre at (443) 844-9253.

Single Carrot Theatre spent its first season moving from space to space, performing at multiple theatres and venues. Though the theatre found it’s longest home to date at Load of Fun, SCT has still performed in multiple venues all over the city, having produced work at Centerstage, Theatre Project, Liam Flynn’s Ale House, Westminster Hall at University of Maryland, Goucher College, Enoch Pratt Library (Orleans Branch), Baltimore Crisis Response, Inc., The Walters Art Museum, the Baltimore Museum of Art, and dozens of other schools, theatres, and performance spaces all over Maryland.

WHAT :
Drunk Enough To Say I Love You?
By Caryl Churchill
Directed by Ben Hoover
Featuring Ensemble Member Elliott Rauh
Follow Guy and Sam as they navigate the tumultuous political love affair America has cultivated with the rest of the world, and its inevitable backlash.