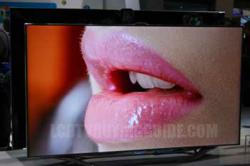 Expert Reviewers and Editors from CEAG's TV Buying Guides have written complete commentary on new TV models such as the Samsung UN75ES9000 75” LED TV which debuted this fall. “There are a slew of very high priced exceptional new technology TVs entering the market right now,” explained Robert Wiley, editor of CEAG. “It's an exciting time with huge LEDs, 4K and OLED technology slamming into one another." He states of the above referenced TV, “This is Samsung's top of the line for 2012, the 75 inch UN75ES9000. The massive edge lit LED has tons of extra features including a cool new remote which includes a QWERTY keyboard and Google's new TV search function. 3D viewing is excellent with no visible crosstalk, blurring in the edges or 3D screen uniformity issues. It's also got that very cool styling and super thin screen depth.”

Other models the company has been researching and reviewing include the new Sony XBR-84X900 84 inch 4K TV for which reviewer Jack Burden states, “Having viewed a 4K TV I can say that if the upscaling is done well, you still get an amazing picture quality. Sony is proven at this sort of technology and incorporates the 4K X-Reality PRO picture engine into the XBR-84X900. Here's what Sony has to say about their upscaling technology on this 4K TV: “Viewers can now watch video on the large screen of this XBR TV and not see any the degradation of image quality traditionally associated with larger screen sizes.”

The Samsung 55 Inch OLED TV is another offering for which editors comment, “This 55-inch ES9500 is Samsung's very top-of-the-line model hands down in every aspect. The picture quality is more defined, with richer colors, and with cleaner lines and better lighting than any TV that has come before it. No current plasma or LCD TV can match the color reproduction or black levels that the ES9500 is capable of. In fact, this TV is 20% better at color reproduction than any TV currently on the market if we do not count Sony's small 24" OLED.”

Lastly, reviewers comment on two new LG entries in this illustrious club the LG 84LM9600 84” 4K TV for which they comment, “Up-conversion is the major challenge. It takes a lot of processing to take a 1080i signal or a 1080p signal and up-convert it all the way to 4K. That's 400 percent in the case of 1080p. But it can be done and we saw it. For reference the Sony BDP-S790 has up-conversion capability and costs only $248 so would be a great fit for this TV.” And for the LG 55EM960V OLED TV, “The 55-inch EM960V is LG's answer to the up and coming OLED display technology in TVs. The race is on between LG and Samsung to see who actually gets it here first, regardless we will see it on the market and available for purchase by the end of 2012.”