‘The Children of Eliza: Unearthed’ tells of a secret clan of the matriarch Eliza and how they survive discovery, persecution to fully understand their powers and use them 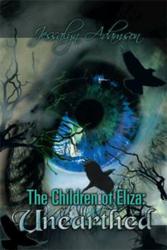 On a night not long after the boy who had taken her heart left her without warning, Ruby Reddings, a poor peasant girl who knew of life only in her small, peaceful village, discovers that she has the ability to heal the mortally wounded. In olden times and modern times, this ability is something beyond anyone’s comprehension or belief – more often than not they are persecuted. Jessalyn Adamson’s The Children of Eliza, a tale of preternaturally gifted beings such as Ruby, is an absorbing tale of how such rare beings gather together to survive and discover the uses of their powers.

That night, she had brought a badly injured wolf back on its feet. She believes that it was the Beast of village legends that she saw leaving the wolf behind for her to look at. She never really believed in those legends until that night. Soon, the Beast attacks the village, killing her beloved sister Trixie. In a moment of extreme emotion, the power flowed out of Ruby’s lips as she kissed her dead sister on the forehead. Trixie rises from the dead and paves the way to her unearthing the secrets of The Children of Eliza.

Ruby also discovers a company of nine other people with abilities no one else possesses. Seemingly, she has found a haven of people with the same type of abilities she has. And Leonard, the boy who left her, her once and future beau, is counted among them. When one of their number betrays them, they discover that they need to call on the matriarch Eliza to save the present and the future. The adventures of Ruby have only begun – will she and her gifted mates survive their powers and be able to use them for the common good?

About the Author
The Children Of Eliza: Unearthed is Jessalyn Adamson’s first novel. She unearthed the plot at the age of fourteen and continued on until it was published at the age of sixteen. She often chose to work on the story during school hours, surprisingly she never got caught. She currently resides in Utah with her parents and siblings and enjoys writing and reading. She plans on majoring in English and getting her degree in creative writing.