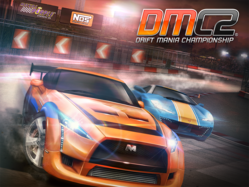 “With millions of players worldwide, we received tons of feedback over the past two years. After a year of development, we are now back with the ultimate drift game available for any gaming platform.” says Ratrod Studio’s President Pat Toulouse

Developed in collaboration with DMCC, the only professional drifting series in Canada, and officially sponsored by NOS Energy Drink, Drift Mania Championship 2 tests players’ drifting expertise against the four main criteria of speed, line, angle, and impact. Players can qualify on the podium to unlock different circuits and cars and upgrade their ride by installing aftermarket performance products from licensed brands including Royal Purple, K&N, Magnaflow, Centerforce, Whiteline and Mishimoto. Featuring a soundtrack from A’n’R Music Limited that includes songs from Templeton Pek and KNGDMS, players can also listen to songs from their own music library as they take the lead and cross the finish line.

“With millions of players worldwide, we received tons of feedback and suggestions over the past two years. We listened to all our fans and took everything in consideration when designing this sequel. After a year of development, we are now back with the ultimate drift game available for any gaming platform,” says Ratrod Studio’s President Pat Toulouse.

Drift Mania Championship 2 for Android is available on Google Play for $1.99 at: https://play.google.com/store/apps/details?id=com.ratrodstudio.driftmania2

A Windows 8 Store App version will also be available by the end of October.

More details about Drift Mania Championship 2 can be found on the official website at http://driftmania2.com.

About DMCC
Drift Mania’s mission is to promote drifting to people who are passionate about racing, extreme sports and modified cars. In the safest of environments, Drift Mania aims to provide fans with an amazing experience showcasing the best drifters fighting for the title of Drift Mania Champion. The popularity of the sport is experiencing growth like no other sport in the world.
(Website: http://www.dmccdrift.com/)

About Ratrod Studio Inc.
Ratrod Studio Inc. develops video games for mobile devices including iPhone, Android, handheld devices, game consoles and personal computers. With the mobile gaming space constantly expanding, Ratrod Studio has already reached over 15 million users for their games across all platforms. Ratrod recently moved their company headquarters to a new office space located in Gatineau, Quebec earlier this year. Due to a large demand, the company is already planning to open a second studio in the upcoming months. Ratrod Interactive will focus exclusively on client-based video game development and provide multi-platform solutions for both the entertainment and advertising fields.
(Website: http://www.ratrodstudio.com/)

The Most Realistic Drift Experience