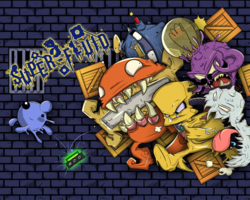 It's really important to nurture the UK’s passion for games and provide opportunities to work in this great industry.

Virgin Media is counting down the days as it gears up to reveal an all new mobile game ‘Super-Fluid’, as the developers head towards the critical final stages of the project, bringing to life their new game concept in just 100 days. The team from Essex University won Virgin Media’s 100 Day Game Project, run in association with Eurogamer and The University of Abertay in Dundee, championing the talent of young developers in the UK.

With the demand for app developers increasing rapidly, the 100 Day Game Project was set up by Virgin Media to seek out raw UK talent and show support to the UK computer games industry. With over 50,000 visitors expected to arrive over four days at the Eurogamer Expo this will be the first opportunity for the public to try out the new game.

Surface Tension Studios has been working day and night to develop their concept into a reality, shortly after the team completed their Computer Science degrees at Essex University earlier this year. Throughout their exciting development journey they’ve had support from some of the industry’s major games development gurus such as Michael Nimmo (Codemasters) and Andrew Eades (Relentless Software) who has offered the team an internship to work across their exciting new range of mobile games.

Andrew Eades, CEO of Relentless Software said: "It's really important to nurture the UK’s passion for games and provide opportunities to work in this great industry. We've recently set up a mobile division which plans to launch six games a year and we need a lot of people to make those games happen, so an internship to such a talented team is our way of saying 'Relentless loves people that love making games’.”

The new game ‘Super-Fluid’ has been developed to work across Android and Apple devices and will launch in October. The puzzle-based platform game uses tilt-based controls for navigation through the levels as the character changes into three different states - solid, liquid and gas. The game’s narrative follows ‘Superfluid’s’ attempts to escape from its creators ‘Dynamisplice’, facing a variety of puzzles and challenges to navigate through each level, and get past enemies, including the Diabolical Jellies and Stalagbites. Even more baddies are already in the pipeline to be introduced such as Mirror Max and Ferro-Fluid which have already proved popular though an online public vote.

With the game almost complete, the team will travel to the Eurogamer Expo to ask visitors to comment on the design, game play and characters before polishing off the final levels live on the Virgin Media stand.

Dave Pearson, Surface Tension Studios said: “This has been an incredible opportunity for us and has been a massive challenge, but we’re really pleased with how far the game has come surpassing all of our expectations in terms of what we’ve been able to achieve in just 100 days.

“Working in the games industry is all the team has wanted to do and we’re really excited to finally being able to showcase ‘Super-Fluid’ at one of the biggest gaming exhibitions in the world. That aside, we’re even more thrilled to be attending the Expo to satisfy our own gaming needs as we’ve not had much time for that recently.”

Luke Southern, head of sponsorship at Virgin Media, said: “We are so proud of the team’s achievement, we set out to find the new talent in the industry and we found a team that has far exceeded expectations. We’re delighted to have partnered with such great companies who have shown nothing but admiration and support for the work the guys have been doing and who share the belief that the UK games industry is one of the best in the world. We wish Dave and the team every success in the future!”

Virgin Media is also showcasing the hottest games, with the fastest broadband at Eurogamer this year. The company is partnering with some of the top games publishers with three exciting gaming titles, FIFA 13, GRID 2 and Mists of Pandaria, to give visitors to the show the opportunity to try out the latest games using its superfast broadband with speeds of up to 100Mb.

Also on the Virgin Media stand, and following their sell-out success of previous years, BAFTA's Career Surgeries are back at Eurogamer Expo on the afternoons of Thu Sep 27, Fri Sep 28 and Sat Sep 29, offering an unmissable chance to talk directly to major figures in the UK games industry. The surgeries are recommended for visitors aged 18 or over. Details can be found at http://tinyurl.com/BAFTAcareersurgeries or visit the Virgin Media stand.

Virgin Media is the first provider of all four broadband, TV, mobile phones and home phone services in the UK.

The company’s cable network – the result of a multi-billion pound private investment – delivers ultrafast broadband connections to over half of all UK homes, with speeds of up to 100Mb, and is being expanded to reach thousands more people across the country.

Virgin Media has developed the most advanced interactive television service, bringing together broadcast TV, thousands of hours of on demand programming and the best of the web in a single set-top box powered by TiVo. The company was the first to offer HD TV and 3D on demand to millions of UK households.

Virgin Media also operates the most popular virtual mobile network in the UK which, when launched, was the world’s first such mobile phone service. It is also one of the largest fixed-line home phone providers in the country.