Proceeds to benefit the Joan Gaeta Lung Cancer Fund and their efforts to support research and awareness. 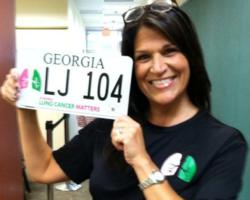 Tina Pink holds her Lung Cancer Awareness Plate - the first one of its kind in the world to be registered.

Now it's our mission to get them on as many cars as possible!

The plates are now available exclusively through The Joan Gaeta Lung Cancer Fund. Georgia drivers can learn more and begin the process of getting theirs at http://www.LungCancerLicensePlate.org.

The license plate is sponsored by The Joan Gaeta Lung Cancer Fund, a non-profit based in Atlanta that raises awareness and research funds for the number one cancer killer in the world.

The process to create specialty license plates in Georgia typically takes nearly two years. The state requires either 1,000 plates to be presold or an up-front payment to be made to cover the fees for those plates. Through The Joan Gaeta Lung Cancer Fund's fundraising efforts and the incredible generosity of their supporters, the Gaeta Fund was able to make the payment needed and to the get the bill before the legislature in a matter of months.

State Senator Sean Jerguson (R-Holly Springs) was instrumental in adding the lung cancer awareness language to an existing bill (HB 732). He was alerted to this important cause by his close friend and Gaeta Fund supporter, Jackie Archer. A lung cancer survivor herself, Mrs. Archer is also a former Holly Springs City Councilwoman. In April of this year, Georgia Governor Nathan Deal signed HB 732 into law.

"My mother, Joan Gaeta, died of lung cancer after a three-and-a-half year battle," says Tina Pink, a VP of Fundraising for the Gaeta Fund. "She was most passionate about raising awareness and fighting the stigma of the disease. This plate is a big step in that direction. I know she would be very proud! Now it's our mission to get them on as many cars as possible!"

Mrs. Pink's sister, Theresa Andretta, VP of Operations, concurs. "Lung cancer kills more people than the next five cancers combined! Yet, it receives the least amount of funding. We have no choice but to raise awareness and to fight the stigma. These plates are a great way to do that. It is incredible to finally see them on the road!"

ABOUT THE JOAN GAETA LUNG CANCER FUND
The Joan Gaeta Lung Cancer Fund was created in the fall of 2007 as The Joan Gaeta Lung Cancer Foundation by her husband and children to raise awareness of the disease, to educate the public, and to be an advocate for research. They also strive to eliminate the stigma of lung cancer and to support survivors and their loved ones in their local community.

In July of 2010, they re-launched as The Joan Gaeta Lung Cancer Fund benefiting the Addario Lung Cancer Medical Institute. Their ultimate goal remains the same: “to eradicate lung cancer.” By partnering with one significant research initiative, they can make a much greater impact in wiping out lung cancer.

ABOUT THE ADDARIO LUNG CANCER MEDICAL INSTITUTE (ALCMI)
ALCMI was established in 2008 as a 501(c) (3) non-profit organization with the ultimate goal of significantly impacting survival by directly catalyzing and accelerating discovery of new and more effective treatment options for all lung cancer patients. Presently, ALCMI has 13 academic and community medical centers in the United States and Europe closely collaborating on cutting edge research initiatives.

ABOUT LUNG CANCER
-Even if you have never smoked, you can get lung cancer.
-60% of new cases are now diagnosed in non-smokers and former smokers.
-Lung cancer is the #1 cancer killer of both men and women.
-Every three minutes, someone is diagnosed with the disease.
-It kills more people each year than breast cancer, prostate cancer, colon cancer, liver cancer, melanoma, and kidney cancer combined.
-It surpassed breast cancer of the #1 killer of women in 1987.
-The five year survival rate for lung cancer is still only 15% - the same as it was nearly 40 years ago.
-Learn more at http://www.NobodyDeservesIt.com