Silo Theatre and The Edge are thrilled to announce the theatrical debut of two of New Zealand’s most revered musicians: Jon Toogood and Julia Deans, as they pay homage to the great JACQUES BREL, playing at the magnificent Auckland Town Hall from 1 November. 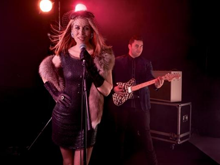 Jon Toogood and Julia Deans are joined by celebrated singer/songwriter Tama Waipara and perhaps New Zealand’s First Lady of cabaret: the distinguished Jennifer Ward-Lealand. Four extraordinary music talents interpreting the genius that is Brel. Songs which tell stories about how life hurts, youth dies, understanding heals, love warms. His narratives portray people who are unwilling, in spite of all that they experience, to abandon either the joy of life or the hope that makes life worth living.

Along with a live four-piece band, this all-star cast set the stage for Silo’s cabaret noir; an atmosphere reminiscent of those smoky, dimly lit underground bars in New York and Berlin where the music flows as effortlessly as the old school charm and swagger.

Jacques Brel has long been considered a major influence in modern music; a revolutionary artist selling over 25 million records worldwide. His music, rich in mid-20th century European sensibility, remains timeless to this day - and its dark, sardonic, witty, style has been covered by hallowed musicians such as Cohen, Bowie, Sinatra, Simone, Wainwright... the list is near endless. If You Go Away (Ne Me Quitte Pas) has been covered by over 60 different recording artists worldwide since it was first written in 1959.

Silo’s love affair with Brel isn’t new. In 2005, the company’s celebration of his work, Jacques Brel is Alive and Well and Living in Paris, sparked a box office frenzy and became one of the most successful productions in their history.

Things are a little different this time around, however. BREL is a new show created from scratch by Silo, with the songs carefully selected by the company. As rearranged by the accomplished Leon Radojkovic, they become unique musical mash-ups, delivered live by members of “Balkan music titans” Dr. Colossus. The sheer musical poetry of each song supports layers of interpretation, and with this production Silo aims to reinterpret the songs for a contemporary audience.

Iconic talent Michael Hurst brings his seasoned theatrical experience to the directing chair, as Silo boasts perhaps its most eclectic and astounding collection of performers to grace the stage of a New Zealand theatre. Housed in the alluring confines of the historic Auckland Town Hall Concert Chamber, table service and cabaret seating provide the ultimate group indulgence.

“When you write a song, most of the words you use are in black and white, and then, from time to time, you use one that's in colour. These words in colour are a part of ourselves, because we give them a meaning. If you like, we give them a third dimension.” JACQUES BREL