Millions of “Highly-Human” Jobs May Be on the Horizon, with Early-Bird Opportunities Now, According to EraNova Institute

While employment hangs back, a whole new form of work is straining at the starting gate. That's the conclusion of a special report from EraNova Institute. It documents an emerging shift to the next level of employment beyond today's service and knowledge economy, non-automatable work in the "highly-human economy." We don't have to wait for these new jobs to materialize, according to the report. Millions may be created right now by people who see the trend and follow recommended steps. 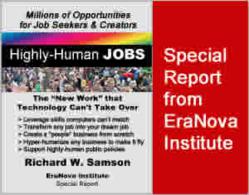 The great thing is that we don't have to wait for anybody to create these jobs for us.... Anyone can create them right now on their own.

There's good news on the jobs front for enterprising individuals and organizations, according to a special report from EraNova Institute, "Highly-Human Jobs, The New Work that Technology Can’t Take Over."

Millions of people-oriented, non-programmable jobs may be created now, the report concludes, replacing jobs lost to automation and systemization. And everyone can get into the act.

Written as a practical roadmap for working people as well as entrepreneurs, business leaders, and policy makers, the report offers guidelines for –

Methods and examples are given for honing the seven highly-human skills that set people apart from electronics and systems. The report also describes the budding "highly-human economy,” set to overtake the present service and knowledge-work economy, which earlier overtook the manufacturing economy, which in turn superseded the agricultural economy.

According to Richard W. Samson, author of the report, the coming highly-human economy will feature mental, emotional, social and other non-programmable forms of conscious aliveness that highly automated and even artificially intelligence systems can't match.

"The great thing is that we don't have to wait for anybody to create these jobs for us," says Samson. "Anyone can create them right now on their own -- although business leaders, the next President and Congress can help.”

Selling for $7.95, the report may be downloaded, in PDF format, from EraNova’s Highly-Human Jobs website,http://highlyhumanjobs.ning.com. Complimentary copies may be requested by journalists, bloggers, and broadcasters.