Cheap Concert Tickets announces that Pink will be touring North America during 2013. Official ticket onsales for her concerts in Toronto at the Air Canada Centre, Washington DC at the Verizon Center, Chicago at the United Center, Phoenix at the US Airways Center, San Jose at the HP Pavilion. Concertgoers can use the exclusive customer appreciation code "PINK" for additional savings. 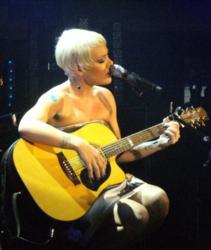 Trendsetting artist Pink is going to tickle everyone Pink with her “Truth About Love” US Tour slated for February to March 2013. It’s first single “Blow Me (One Last Kiss)” was performed live at the 2012 MTV Video Music Awards.

The multi-city series of concerts is aimed at promoting her new album "Truth About Love and fortify Pink’s status as a formidable name in the music industry. With an astounding career and accolades on her belt, truly nothing can stop Pink’s momentum to the top.

There are but a few entertainers who have reached the status and following that Pink is enjoying today. Considered as one one of the most influential singer-songwriters of her time, Pink has enjoyed worldwide success with many of her singles, albums, and even film appearances.

Pink began her career back in 1995 in the American R&B girl group, Choice. She then started on her solo debut album, Can’t Take Me Home which was released on April 4, 2000. It was a major hit with double platinum sales in the U.S. with two top ten singles, “There You Go” and “Most Girls.” Her big break came when she was chosen to be the opening act for ‘N Sync’s the American tour in the summer of 2000.

Pink became even more prominent in the music industry with collaboration with Christina Aguilera, Mya, and Lil’ Kim for the song “Lady Marmalade” for the film Moulin Rouge! The song topped the charts in multiple countries further propelling her to fame. Her career has been on a steady rise ever since with multiple chart topping hits to follow such as “Get the Party Started”, “Just Like a Pill”, and “God is a DJ.” Pink is also an established artist in other media as she has appeared in multiple films throughout her career. She also voiced Gloria in the Warner Bros. movie Happy Feet Two.

Check out the “Truth About Love” tour dates and upcoming projects and appearances from February to March 2013.

Cheap Concert Tickets delivers tickets to sold out concerts and events worldwide when no one else can, and they do so at discounted prices. As a member of TicketNetworkDirect, they can guarantee the delivery of tickets on time for sporting events like NASCAR, NBA, NFL, and NHL. This popular ticket exchange also has cheap Pink Tickets Chicago, Pink Toronto Tickets, CMA Country Christmas Tickets and CMA Annual Awards Tickets at great everyday low prices. With CheapConcertTickets.me customer service is a priority, for more information email support(at)cheapconcerttickets(dot)me.