New Action-Packed Novel Tells Story of Power, Corruption and Rebellion in the Midst of a World Enslaved by a New World Order

The first in a series of books about a unified world government and those who have rejected and rebelled against it in order to bring truth and freedom back to humanity. 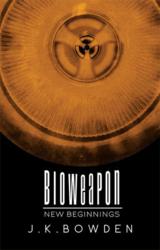 In the world of tomorrow, peace finally reigns but at a terrible price. The internet binds people in a state of unified progress, achieved through a microchipped population, once united in the face of destruction, now bent to the will of an insidious secret society that controls every inch of the planet from the shadows.

Bioweapon, written by J.K. Bowden is an exhilarating, futuristic, action-packed novel about a world consumed by an all-powerful New World Order that would eventually enslave the entire human race. Those who have rejected the unified world government are forced to flee to the most unlivable parts of the Earth, and are branded as rebels and secretly hunted to extinction. Their only hope lies in the incredible scientists who are at the forefront of the rebellion, and the deadly bioweapons they create.

Meanwhile, Leah Sudeski, a London based private journalist, stumbles onto some shocking evidence that will change everything she has ever known about the peaceful society she was born and raised in. Desperate for answers she begins an impossible mission, aided by the rebels, in order to bring truth and freedom back to humanity. Will they emerge victorious in the end?

Bioweapon offers readers an entertaining and imaginative read that is at the same time a social commentary four years in the making. The world depicted within Bowden’s story is a frightening one but it is also an increasingly plausible dystopian take on current developments in politics and science that readers can easily relate to.

About the Author
Jeremy Bowden has been an avid reader and writer since the age of three. He has a degree in Psychological Sciences from the University of New South Wales, Australia, and is an active advocate for social change, having also co-founded the educational reform program ‘Elemental Education’. Visit http://www.jkbowden.net to follow release/event details and for further author information.

Xlibris books can be purchased at Xlibris bookstore. For more information, contact Xlibris at 1-800-618-969 or on the web at http://www.Xlibris.com.au.