Drew Stewart runs Iscential’s Memorial office in Houston and has built his career on his passion for helping and educating his clients. 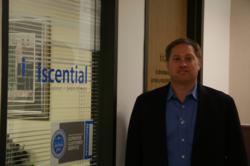 Insurance sales to me was an old dude in a bad polyester suit... until I met Warren and he made it look cool.

Financial planner. Risk manager. Insurance agent. Successful business owner before age 35. Drew Stewart is all of these, and this year he celebrates 10 years with Texas risk management and financial services firm, Iscential.

Stewart graduated from Texas A&M University in 1999 with a Bachelor of Science degree in Agriculture Economics. In 2000, he joined Houston financial advisory firm, Olde Brokers. “I likened it to a black hole,” he says of the office following the post-9/11 market collapse. “The staff went from 20 to only 4 or 5 people. I knew I had to find something else, and quickly.”

He laughs reminiscing that this was the first time he ever looked for a job online, but Stewart came across an interesting opportunity on Monster.com: an opening at a local Nationwide Insurance agency.

“Insurance sales to me was an old dude in a bad polyester suit,” Stewart jokes. “Until I met Warren and he made it look cool.”

Warren Barhorst currently runs the largest Nationwide Insurance agency in the United States. He started his own firm (then known as the Barhorst Insurance Agency) in 1993 and built it from 2 employees to more than 100 and from one location in Jersey Village to 26 across the state. Barhorst brought Stewart on board in 2002 as a Certified Financial Planner. Stewart quickly found adding insurance products and risk management services were ways to diversify. And diversification was crucial to someday owning his own business.

“Becoming a business owner was never part of the plan, but neither was selling insurance,” Stewart says. “But being your own boss and having an unlimited income potential… I wouldn’t trade it for anything.”

Stewart runs on an intense passion for the business, and for helping others. He still remembers his first claim: a call that his client’s home had burned-down home just after midnight on New Year’s Eve. “It was a terrible situation, but I felt like I was part of the most noble profession in the world when we were able to show up with a check, even before daylight. We told them we’d make things right and we did.”

Stewart’s love for “all things insurance” has gained him the nickname, “Insurance Nerd”, and it’s evident that he wears it with pride. “I just love to talk about insurance!” he says with a huge grin. Stewart views his job as not just selling products, but educating his clients. “It’s exciting meeting new people and working together to make sure they have the coverage they need,” he says. “My clients leave my office knowing more about insurance than when they came in. They know what they need, what they don’t need, and most importantly, why. That’s part of the job I love the most.”

Stewart also teaches Continuing Education classes to local Realtors, including courses on homeowners, flood insurance, investment homes and more. “Warren [Barhorst] taught me a lot about the importance of educating outward and earning the role of a trusted advisor. I want to be a resource to my clients, not just an agent they talk to maybe once a year. I’m here for them whenever they have questions, and I make sure they know that.”