In the November 15th release of the ISS Hockey Rankings, Nathan MacKinnon, Seth Jones and Sasha Barkov retain their numbers 1,2 and 3 rankings. MacKinnon's linemate Jonathan Drouin jumps from number 10 to 4 with great patience, elite playmaking ability and an abundance of hockey sense. 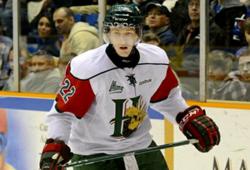 Jonathan Drouin moves up to number 4, having the offensive pedigree that scouts love.

ISS Hockey has released its new monthly rankings of the top prospects eligible for the 2013 NHL Draft. This month's rankings include the top 150 skaters, along with the top 10 goaltenders, as evaluated and ranked by ISS Hockey’s worldwide network of scouts.

Below are the rankings for the top 30 prospects. A detailed list is available on the company website at: http://www.isshockey.com/scouting/news?news_id=64

"I can't say enough good things about Drouin", says ISS Hockey Director of Scouting Dennis MacInnis. "With added size and grit, he would challenge MacKinnon for #1 overall. He was the most dangerous player on the ice when I saw him recently, with great patience, elite playmaking ability and an abundance of hockey sense. He has the offensive pedigree that scouts love."

The monthly ISS Hockey rankings are included in the company’s NHL Scouting Report Subscription, which is tailored for the general manager, team scouting staff and coach who want in-depth information on prospects for upcoming NHL and CHL drafts, as well as for other professional, collegiate and amateur recruiting. Rankings, player profiles, spotlights, tournament reports and news and notes from the world of hockey are published on the 15th of each month from October through June. For more info, visit: http://www.isshockey.com/scouting/products?product_id=73

About ISS Hockey
International Scouting Services (ISS Hockey) is the leading independent scouting and information provider on hockey player prospects aged 14 to 19. Founded in 2002, ISS scouts, evaluates, analyzes and ranks players internationally on behalf of its many clients, which include (among others): NHL Teams, Hockey Canada, Major Junior Leagues & Teams (CHL, QMJHL, OHL, WHL, USHL), NCAA Teams, TSN, THN: The Hockey News and Sports Agencies. The ISS annual NHL Draft Guide has become the de facto draft reference guide for NHL scouts, fans and sports media. All ISS products are widely utilized in the hockey world, building an industry leading reputation for the best and most comprehensive scouting information. This incredible status leads every young hockey player desiring to advance in the sport to aspire to be scouted and ranked by ISS. The key to the success of ISS is the incredible worldwide network of ISS Hockey scouts. ISS scouts are within reach of every young hockey player in the world, and attend every major hockey tournament, in addition to thousands of league games. Game and player reports are input into ISS's state-of-the-art systems and evaluated assure reliability and consistency. All players that we rank will have been seen and evaluated many times by several of ISS scouts.
Visit the company’s website at: http://www.isshockey.com