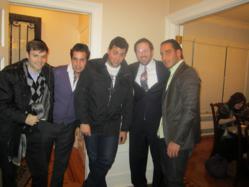 Each Wednesday evening Brooklyn Jewish Xperience hosts a complimentary dinner and business networking event for young Jewish entrepreneurs and professionals in Flatbush. Rabbi Yitzchak Fingerer, the dynamic leader of BJX, introduces the speakers and shares Jewish wisdom on dating and relationships, current events, and other contemporary subjects. People are always mesmerized by his upbeat style, his eclectic range of topics, and his humor.

“BJX’s goal is to bring young Jews together in a non-intimidating venue where they can connect with other Jews, network, and strengthen their ties to their Jewish heritage,” explained Rabbi Moshe Fingerer, co-founder of BJX.

Jamie used to live in Brooklyn but now comes each week from Queens. “I love their programs,” says Jamie. “I meet incredible mentors and CEO’s whom I wouldn’t have had direct access to if not for BJX bringing them to network with us.”

At BJX’s recent program, Zack Fruchtandler, CEO of Long Island Industrial, a leading real estate development company that is dubbed, “Landlord to corporate America” because of its prominent Fortune 500 tenants, spoke candidly to the participants about his challenges and successes in his personal and professional career and how Judaism serves as his anchor for leading an ethical and productive personal and professional life. Mr. Fruchtandler graciously stayed after his talk to mentor and provide guidance to the audience. Dr. Israel Blumenfrucht, chairman of the accounting department at Queens College, was also in attendance. He offered to assist and guide students with their professional pursuits. Also present was Neil Kerman, CEO of BSD Entities, a real estate and health-care management firm. Mr. Kerman helped the students facilitate networking. Neil is always a big hit with the students. His warm and caring nature make him their beloved mentor and coach. The program was generously hosted by Mr. and Mrs. Bernard and Baila Rosenberg.

“I hope that they’ll soon run all their programs here,” said Mitch from Park Slope. “I don't mind traveling in, but having BJX closer to home has its advantages.”

“We would love to have a brownstone in Park Slope where we can run our programs and classes. There’s so much more we can do,” said Fingerer.

This Wednesday, November 28, BJX is hosting in the Kosher Delight party room: Restaurant Night Out. This special event is sponsored by noted community activist, Mr. Shimon Lefkowitz. Mr. Lefkowitz is the CEO of Palm Gardens Center for Nursing and Rehabilitation, Heritage Center for Rehabilitation and Health Care, and Waterford on the Bay Senior Living. In attendance will also be Mr. Peter Rebenwurzel, a New York City Real Estate CEO who is also Chairman of the Raul Wallenberg Centennial Commission. Professionals from all over Brooklyn will come together and enjoy a complimentary dinner and networking event; as always, there will be some Jewish wisdom, too.

About Brooklyn Jewish Xperience
BJX is a community-based and-centered organization striving to better and bolster the values of the surrounding community. In addition to its weekly business networking events, BJX offers mentoring programs and regularly conducts self-empowerment workshops to train and coach singles and couples on how to make the correct long-term decision on issues such as career goals, moral dilemmas, and relationships issues. Brooklyn Jewish Xperience educates, empowers, and inspires Jewish college students and young professionals throughout Brooklyn to be the leaders of tomorrow. To register for an event, go to http://www.BrooklynJewishEvents.com. One can sponsor an event or endow a BJX center in downtown Brooklyn, by calling 646-397-1544.