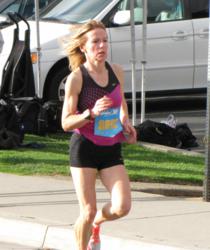 Christine Kennedy wins her age group at the 2012 Carlsbad 5000

One of the great uses of the ElliptiGO is to extend a healthy runner’s career.

The ElliptiGO Project, a group of elite runners focused on using innovative training tools and techniques to improve performance, today announced that 2011 USATF Athlete of the Year, Christine Kennedy, and Canadian Marathon Champion, Bruce Raymer, have joined the Project. Kennedy and Raymer join an already impressive group of runners that includes 15-time All-American and two-time US National Champion Lauren Fleshman, US National Champion Julie Culley, Badwater Ultramarathon Winner Dean Karnazes, 50K US Record Holder Josh Cox, and 2008 Olympic Marathoner Magdalena Lewy Boulet. All of these athletes are incorporating the ElliptiGO and other innovative techniques and tools into their training in order to get faster and achieve their goals.

Kennedy’s remarkable versatility as a runner led her to victories in events ranging from the 5,000 meters to the marathon distance in 2011. She won titles in the 5K, 10K and 15K at the USA Masters Championships and then two more in the 5K and the marathon at the World Masters Athletics Championships. Now 57 years old, she has set her sights on repeating these wins in 2012 with continued use of the ElliptiGO to give herself that special edge.

“I feel very grateful to still be running competitively,” stated Kennedy. “As a Masters runner, I know how important cross-training is, but it’s easier said than done. That’s why I love the ElliptiGO. It keeps me fit, it doesn’t aggravate my previous injury, and I don’t feel guilty about taking a recovery day. I’m excited to join The ElliptiGO Project and see how other athletes are using this new device in their own training.”

To join the Project, athletes are required to have an inspiring running-related goal that they want to accomplish in the next two years and want to authentically integrate new training tools and techniques in order to help them achieve their goal. In addition, athletes must be willing to share their training and results with other members of the team. Each athlete will use tools like the ElliptiGO in a slightly different way, so a major benefit to the team members is being able to communicate with each other and learn new ways to incorporate these devices into their own workout regimens.

Raymer won the Ottawa Marathon in 1999 to become the Canadian National Champion, and was a seven-time Canadian National Team Member. Now in his 40’s, his goal is to set three Canadian Masters records and run a 31:30 in the 10K in the next 18 months. “I’m currently using the ElliptiGO as an integral part of my training program to extend my running life and build fitness without causing injury. I’m looking forward to being a part of The ElliptiGO Project and collaborating with my fellow athletes on how to best use new and innovative tools, like the ElliptiGO, to run faster.”

As a member of the Project, these athletes will have access to the expertise of Integration Advisor Bob Augello. Augello has been working with endurance athletes at all levels for more than 20 years with a particular emphasis on using innovation to improve performance. His role is to advise Project members on how they can best use all the different tools and techniques identified by the Project.

“One of the great uses of the ElliptiGO is to extend a healthy runner’s career,” said Augello. “Our bodies will inevitably show some wear and tear as we get older, so if masters runners like Christine and Bruce can incorporate the ElliptiGO into their training now and replace a few high-impact workouts a week, they can lessen the impact to their body and hopefully remain a runner for life.”

The Project is currently recruiting elite runners with ambitious goals who are interested in exploring innovative new ways of getting faster and staying healthy. For more information about The ElliptiGO Project, visit the website at http://www.theelliptigoproject.com.

About The ElliptiGO Project
The ElliptiGO Project exists to make runners faster through innovation. It is currently growing membership, adding new innovative running tools, and affiliating with other organizations that share the same goal of improving athletes’ performance through innovation. The Project tests new training techniques through competition, both on the track and on the road, and reports its findings with candor. http://www.theelliptigoproject.com