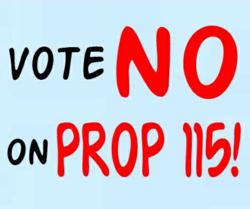 “Proposition 115 threatens the current process of merit selection of Arizona judges. Since 1974, Arizona has operated under this system that utilizes an independent commission made up of Republicans, Democrats, and Independents, which submits the most qualified names to the Governor for final selection to the judiciary,” say the attorneys, who are best known as the Husband and Wife Law Team.

According to the Arizona Legislature House Committee on Judiciary, under the current process, the commission for the county in which a vacancy occurs announces the opening and accepts applications. They investigate and interview the applicants, selecting at least three nominees to submit to the governor to choose one. The applicants must be from varying political parties (no more than 60% from the same party). Within 60 days, the governor must make the appointment.

“This process allows for an unbiased selection of judges to be appointed. If Prop 115 were to pass, the process could be altered, allowing the Governor to almost single-handedly select judges. This could open the judicial branch up to special interest and political intimidation and influence on our judges,” claim the law team.

To spread the message that Prop 115 must be stopped, the serious injury attorneys at the Husband and Wife Law Team put together a video to encourage people to vote no on Prop 115.

View the video at: http://www.breyerlaw.com/prop-115.html.

They are not the only ones who oppose the proposition. Many retired Arizona Supreme Court Justices, including some Chief Justices, also oppose it, along with 19 former Arizona State Bar presidents. Defendant attorneys—those who the Husband and Wife Law Team fight against in court—also are against Prop 115.

Mark Breyer urges, “The impending effect of Prop 115, if passed, is not limited to just plaintiff attorneys or defending attorneys; this is an issue that would drastically change the way the courts operate, for the worse.”

“To keep the justice system impartial, it is imperative that all Arizonans vote no on Prop 115,” encourages the Husband and Wife Law Team. They advise all Arizonans to view their video for more information and tell their friends and family about the issue. Additional information on Prop 115 can also be found at the State Bar of Arizona's website.