Final Cut Pro X editors can now create cutting edge 3D title sequence directly in FCPX with Pro3DT from Pixel Film Studios. With Pro3DT, users can give their Final Cut Pro X text depth and dimension with the click of a button. 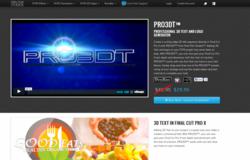 3D text for Final Cut Pro X is something that our fans have been wanting us to make for a long time. Pro3DT is the first of a bunch of awesome text plugins for FCPX that we will be releasing.

Final Cut Pro X plugin developer, Pixel Film Studios, announced the release of their 3 Dimensional text and logo plugin, Pro3DT, today. This Final Cut Pro X effect can turn any text or PNG file into a 3D object and move it in space.

"3D text for Final Cut Pro X is something that our fans have been wanting us to make for a long time," said Christina Austin, CEO of Pixel Film Studios, "Pro3DT is the first of a bunch of awesome text plugins for FCPX that we will be releasing."

Adding 3D text to a project is a great way to give a video a modern, commercial feel. With Pro3DT, editors can now give their Final Cut Pro X text depth and dimension in the click of a button. Pro3DT works with any font that in the font library.

Editors no longer have to worry about having to move a camera in 3D space to get the right look on their text. With 10 preset camera movements in Pro3DT, users can breeze through moving title sequences. All they have to do is use the Camera Angle slider and add start and stop keyframes to their text to get a perfect smooth movement.

After creating 3D text, editors can add a 3D object or lower thirds bar behind it by using the Background Image features. Editors simply have to select a .jpeg or .png to use as the backdrop for their text and see it instantly transformed into a 3D object that can move in 3D space.

Pro3DT was designed by the team at Pixel Film Studios to create flawless 3D text inside Final Cut Pro X without melting computers with renders. With easy-to-use sliders and drop down menus in the FCPX Inspector, users can quickly and effortlessly change the Camera Angle, Lens Type, and Shine of their text along with many other parameters.