With TransFire from Pixel Film Studios editors can quickly and easily add fire burst transitions to their Final Cut Pro X project without sacrificing their camera, house or eyebrows. With 30 fire transtions to choose from, users can burn, blast and burst their way from clip to clip in the click of a button. 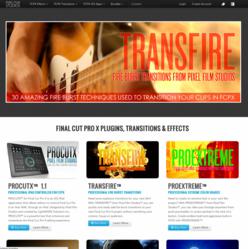 TransFire is the second Final Cut Pro X plugin that we have made that almost burned down our warehouse. TransFire is a great complementary transition to our popular ProPixie and ProSmoke plugins.

"TransFire is the second Final Cut Pro X plugin that we have made that almost burned down our warehouse," said Christina Austin, CEO of Pixel Film Studios, "TransFire is a great complementary transition to our popular ProPixie and ProSmoke plugins."

Using many dangerous and not highly recommended techniques, the team at Pixel Film Studios recorded fire balls and burns at a high resolution and frame rate to create this collection of awesome burn and flame transitions for Final Cut Pro X.

TransFire allows editors to easily - and saftely - play with fire in FCPX without losing their eyebrows. Filmmakers simply have to browse and preview the transitions in real time in the Final Cut Pro X effects browser and choose the one that best fits their clips. Then they can use the intuitive controls to adjust the color of their flames.

The TransFire fire burst transitions include large and small balls of fire, blasting across the screen, to reveal a new scene. With this collection of 30 fire transtions, editors can burn, blast and burst their way from clip to clip in their next film project.

Pixel Film Studios professionally created these explosive fire burst transitions to work directly with FCPX. TransFire can help create energetic styles and themes in any Final Cut Pro X project in the click of a button. Editors only have to drag and drop one of the fire burst transitions between two of their clips and be amazed.