Filmmakers often use camera shakes to add a sense of reality to their film. With ProShake from Pixel Film Studios™, users can create epic bumps, shakes, zooms, and twists right inside Final Cut Pro X. 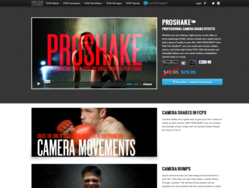 ProShake is a great FCPX effects for adding style and realism to your film. Our fans have been asking for a camera shake plugin for Final Cut Pro X ever since our other popular camera plugins ProLens and ProAxis came out.

"ProShake is a great FCPX effects for adding style and realism to your film," said Christina Austin, CEO of Pixel Film Studios, "Our fans have been asking for a camera shake plugin for Final Cut Pro X ever since our other popular camera plugins ProLens and ProAxis came out."

Camera shakes are a great way to give a film a sense of reality or even tension. With ProShake users can choose the strength of their shake with 12 Camera Shake Presets for Final Cut Pro X.

Quick camera bumps can add energy and excitement to a film. They also can also help create a stylize theme throughout a project. With ProShake, the camera bump presets can be stacked with other presets like the camera shake to create endless unique looks.

Give film a raw, cinema verite style by including the zooming and out of focus shots. With ProShake, editors can create realistic camera zooms and finding focus looks with the footage right inside FCPX.

ProShake comes fully loaded to help users create a look for their film from beginning to end. With the Camera Twist Transitions, users can keep the energy and excitement of the film going from one scene right into the next.

ProShake was created by the team at Pixel Film Studios™ to integrate perfectly with Final Cut Pro X to enhance the editing experience. Simply drag and drop one or many of the ProShake adjustment layers on top of footage in the FCPX timeline to make fun and exciting looks.