Bryan Duncan Is Back On The Radio With "I See You"

Bryan Duncan’s song I See You brought him back to the national radio charts again for the first time in 13 years–proving innovative music business models for independent artists can compete with the traditional methods of big record companies, although it is an uphill battle. 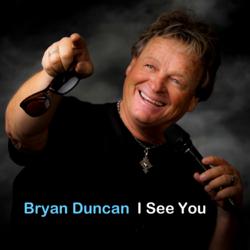 Bryan Duncan Sings "I See You"

I thought that was it for me. Maybe I wouldn’t get to record again.

Bryan Duncan's song I See You brought him back to the national radio charts again for the first time in 13 years–proving innovative music business models for independent artists can compete with the traditional methods of big record companies, although it is an uphill battle.

Duncan’s songs were a Christian radio staple in the 1990s. Between 1993 to 1997 his singles charted number one 10 times and other radio hits followed.

But the ‘90s ended and so did Duncan’s recording contract. "Joyride," released in 2000 on Diadem Music, was his last album with a big music company.

Duncan went on to record three independent albums with The NehoSoul Band. He performed hundreds of concerts, solo and with the band. But Duncan did not thrive as an independent artist.

“During my time with the big record labels I learned a lot about recording,” says Duncan. “But I never understood the marketing, promotion or business sides of music. I could write and record songs but I didn’t really understand how to get them heard.

“The big record companies produce a lot of albums. If you’re not prepared to compete with them for attention at radio and in the press, you simply don’t get much.”

Despite Duncan’s prodigious talents, his career languished. Without radio, marketing and promotion he couldn’t effectively reach the people who had loved his music in the ‘90s, much less grow his audience. He wasn’t able to recoup the funds he’d invested in his independent records and his opportunities to perform concerts dwindled.

By 2010 things looked pretty bleak for Duncan. Few people had even noticed his 2009 release "Still Dancin’" with The NehoSoul Band. Touring with a band wasn’t economical, and the prospects of recording again seemed slim.

“I thought that was it for me,” says Duncan. “Maybe I wouldn’t get to record again.”

Meanwhile, longtime friend Christopher Redner had convinced Duncan to begin reconnecting with his past audience through social media. Starting from scratch and with no budget, it was a slow process. But Duncan loves to connect with people, so while his social media presence lacked breadth, it had depth.

Redner was convinced that Duncan’s core audience would respond to a new approach– a convergence of technology, social media and commerce called “crowdfunding”–even though most of that audience hadn’t even heard of it.

“Honestly, I was skeptical,” says Duncan. “And when Christopher proposed a plan to raise $40,000 through crowdfunding, I almost choked. Maybe this crowdfunding thing could work at some level, but I thought we’d be lucky to raise $10,000.”

Redner recommended the Kickstarter platform for Duncan’s first crowdfunding campaign. But Kickstarter’s policy, requiring participants to meet their funding goal or get nothing, raised the stakes. If Duncan set his funding goal too high he would get no funding.

Redner argued that if he set the goal too low he’d only partially fund a recording and have nothing left for marketing, radio or promotion. He’d be repeating his past mistakes as an independent artist.

“I’d never run a crowdfunding campaign, but I’ve had relevant experience with charities,” says Redner. I did a lot of research and I wasn’t pulling a number out of the air.”

“The crowdfunding process and how we continued to involve the audience after the campaign closed had a profound influence on my songwriting,” says Duncan. “Many of the songs on this album are about how God is working in my life through my relationships. There’s a current of gratitude that runs through "Conversations.”

"I See You" is a grateful acknowledgement of God's presence and participation in our lives.

"My wife does this thing throughout the day," says Bryan Duncan. "She'll be working at something and out of the blue she'll just stop, point to the sky and say 'I see you!' I had to smile because it is such a great example of being in the moment with God. I don't see that kind of acknowledgement of God very often. It seemed like the perfect idea for a song.”

Bryan Duncan started performing professionally with the Sweet Comfort Band and recorded six albums with them before launching a solo career. He has released 14 solo albums, including his new album "Conversations," and three more with The NehoSoul Band, selling in excess of 1.2 million records and videos.

Duncan was inducted into the Christian Music Hall of Fame along with Amy Grant and Al Green. His recordings have been celebrated with four Dove Awards and one Grammy Award.

Bryan Duncan Sings I See You