Louise From Distinctive Wash Ltd, Given Strategic Counsel By One Of Britain’s Iconic Global Brand Leaders, Will King, King Of Shaves.

Will King offered to meet Louise Knowler after sending @Distinctivewash a tweet suggesting that Distinctive could be another Wingman brand with his support. So the meeting was set for the 20th December at Home House in London - the exclusive members club, who’s member list includes pretty much everyone on London’s business and celebrity ‘A’ list. 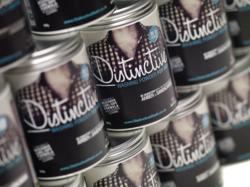 Attracting the attention and support of Will King is as good as having access to the Dragons anyway and so far I haven’t had to give 40% of the business away. That being said for the right investment and support I might

Will King offered to meet Louise Knowler after sending @Distinctivewash a tweet suggesting that Distinctive could be another Wingman brand with his support. So the meeting was set for the 20th December at Home House in London - the exclusive members club, who’s member list includes pretty much everyone on London’s business and celebrity ‘A’ list.

“The Opportunity to gain counsel from another successful brand is imperative to a new start up” said Louise, owner of Distinctive Wash Ltd. “Especially for a business set up where you are relying on yourself for pretty much everything. As the company’s key source for strategy, brand direction, packaging and identity I knew Will would offer me a no nonsense no holds barred critique and frank discussion of my product and what had been done thus far. I purposefully sought him out on Twitter to request counsel in the early days and after he requested to trial my product and liked it, he then chose to maintain dialogue with me.”

Louise believes Its as important to pick the right mentors as it is everything else and clearly felt that Will King, having built a brand that is now twenty years old, was the right man to make contact with. “He does an awful lot involving start up businesses in Britain and I felt we had some really good common ground in background interests. I also found it incredibly likeable that he also had two teachers for parents and sailed with his Dad as I did as a child, and through our discussions found out he was also once involved with the same laundry brand I worked on as a consultant. Quite ironic really,” she said.

“I knew I would like Will even before meeting him but I have to say I liked him immensely. The hour and a half I spent at Home House was invaluable and literally flew by and I had the good fortune to be personally introduced to one of the best secret consumer PR minds and also given a brief introduction to Duncan Bannatyne.”

So what came of your meeting Louise? “Well, some of it covered a direction I had considered for the brand but hadn’t thus far followed, preferring the niche market route of providing the best designer laundry experience for men, so it will be seriously considered before changing course. I fully understand that this change will generate bigger immediate sales but I have a great deal of belief in the original niche market idea we have of segmenting specific markets with specific designer fragranced laundry powders. Whether I actually follow Wills every direction or not is another matter, but it is always good to have your thoughts and plans constructively challenged. Some good ideas were bantered about and we will be staying in contact.”

So why didn’t you go the Dragons route Louise was asked? “I haven’t ruled it out, she said as I would do that if it became the right thing for the brand. At the moment it isn’t, we are making slow but steady progress and attracting an awful lot of International media for such a small brand.

The next six months is about learning, adapting and above all listening to our customers, who are sending through repeat orders and so far no returns.” Louise smiles.

“Attracting the attention and support of Will King is as good as having access to the Dragons anyway and so far I haven’t had to give 40% of the business away. That being said for the right investment and support I might,” she said smiling.

Louise believes in addition to seeking out a mentor for her brand, the best advice for a product always comes from customers and the only way to start getting that kind of feedback is to start selling your products and talking to people. The launch at the Clothes Show Live was all about that as it was an ideal opportunity before Christmas to get in front of the public and see what people made of it. We knew there wouldn’t be lots and lots of men there but its been great to see people buying, smelling the fragrance then smelling again as they walk and passing it to their friends. Even women who bought it at the show are choosing to purchase it again. Women do love expensive sexy male scents and the Amber and Sandalwood in Distinctive really are a delicious combination.

Distinctive Wash has attracted an awful lot of attention from day one, lucky in some ways but in others, attracting so much International publicity immediately has been a bad thing as we haven’t been in a position to deal with the opportunities it has generated.

No one can do it alone though and although gut instinct and research gives a majority of answers another perspective on what you have created is really a superb opportunity to re-evaluate and take stock.

Yasmin gets close because he smells amazingBody heat activates Distinctive

Louise, Billy & TimLouise and the developer crew on the Distinctive shoot day