Animal Support is the proud new sponsor of a rescued cockatoo named Ziggy who lives in the Foster Parrots’ sanctuary for exotic birds and animals. 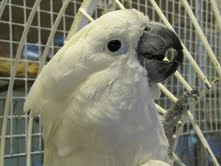 Animal Support is pleased to announce its support of Foster Parrots, a nonprofit organization dedicated to the rescue and care of abandoned or neglected parrots and exotic animals. More specifically, the organization is sponsoring a rescued cockatoo named Ziggy through Foster Parrots’ virtual adoption program. Ziggy was recently nursed back to health after being found abandoned in a foreclosed home. Sponsors’ contributions help pay for veterinary care, fresh food and aviary furniture and toys, including hanging swings, ropes and frames.

While many people are fascinated by these exotic and intelligent birds—some of them can talk, after all—a lot of owners are not aware of the responsibility and expense involved in parrot ownership. Captive parrots need an invariable amount of attention and care during their life time. Certain species of parrots have a lifespan of more than 50 years, and owners cannot fully anticipate their long-term needs. As a result, many parrots are abandoned by their caretakers because of financial hardships, inability to deal with their demands or because they may outlive their guardians.

Foster Parrots (http://www.fosterparrots.com) seeks to offer guidance to parrot owners about the proper standard of care and also to raise awareness of disreputable commercial pet trade practices such as mill-style breeding, parental deprivation and pre-fledge wing clipping. Additionally, some breeders engage in the dubious practice of hybrid breeding, which not only produces parrots with unusual traits and colorations, but also destroys the species’ biological makeup, causing a breakdown of the bird’s natural genetic architecture that enables them to survive in the wild.

Foster Parrots operates a sanctuary for unwanted parrots and exotic animals. In addition to parrots, the sanctuary currently houses African crested porcupines, aquatic turtles, tortoises, peacocks, chickens and numerous species of waterfowl. “By concentrating our focus on parrots, we are extending a vital service to a commercially marketed ‘pet’ that begins its journey at a disadvantage simply by virtue of its wild nature,” states the Foster Parrot mission statement. “By opening our doors to other exotic wild animals that also suffer as “pets” or in captive situations, we are placing parrots in their proper context alongside other wild animals, reminding people that this is, in fact, what parrots are.”

In addition to receiving an MSPCA Human Heroes Hall of Fame award in 2009, Foster Parrots is a member of the Avian Welfare Coalition as well as a WSPA Society member. Foster Parrots also established a conservation project in Guyana in 2004 for the purpose of protecting parrots and other wildlife from capture and poaching.

AnimalSupport.org, founded by Omidi brothers Michael Omidi, MD and Julian Omidi, is dedicated to protecting the welfare of animals - by recommending charities and organizations that fight to stop animal abuse and cruelty. This website will soon contain a network of resources committed to animal protection, rescue and adoption. If you would like to join the fight against animal abuse and neglect or would like more information about Animal Support, please send a message using the website’s Contact Us function. Check out the Animal Support Facebook page at: http://www.facebook.com/animalsupport.org and follow us on Pinterest and Twitter.

Animal Support does not accept donations.