No Musical Skills Required; Jam Like a Rockstar Today with the New ‘Jam’ Music App for iPhone from DreamWalk Interactive 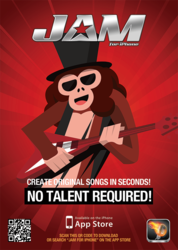 Australian developer DreamWalk Interactive announced today that Jam, a new song-creation app for the iPhone, is now available for download. Perfect for anyone who dreams of becoming a star but might not have the vocal ability, Jam allows users to create original songs that can then be shared with friends. Featuring unlockable musical style packs, award badges and streamlined social sharing tools, Jam can now be downloaded for free at the iTunes App Store: https://itunes.apple.com/app/jam-for-iphone/id580366563

Using Jam is simple. First, choose a musical style from a variety of style packs ranging from pop-rock and hip-hop to punk rock, 80’s dance music and more. Then sing, talk, or rap into the device. Jam will automatically detect and adjust the pitch, key and song structure to create a completely unique song – no two tracks are ever the same!

Users can publish their songs to in-app Jam charts and invite their friends to listen via Facebook and Twitter. Earn badges and royalties for each published track to unlock additional style packs, grow a following of fans and even get signed to one of four Jam record labels.

About DreamWalk Interactive:
DreamWalk is a division of Wellcom Group Limited. It was founded by brothers, Joe and Sam Russell in 2008 with the development the world’s first commercial GPS treasure hunting platform, also named DreamWalk. The DreamWalk treasure hunt platform and variations thereof have since been used by dozens of brands and thousands of users in Australia and the US. http://www.dreamwalk.com.au/