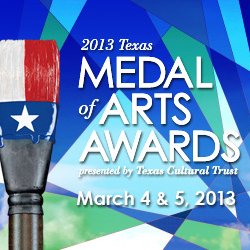 Today, the Texas Cultural Trust announced the 2013 honorees for the biennial Texas Medal of Arts Awards (TMA Awards). The TMA Awards celebrate Texans who have achieved greatness through their creative talents and have enriched the unique culture of Texas. Since its 2001 inception, the Texas Medal of Arts Awards has honored 71 outstanding Texans including Laura Bush, Walter Cronkite, Tommy Lee Jones, Lyle Lovett, Willie Nelson, Robert Rauschenberg and ZZ Top.

The 2013 honorees were announced today at a luncheon at the Houston Ballet Center for Dance in Houston, Texas. Arts patrons, supporters and enthusiasts from across the state joined the Texas Cultural Trust Board of Directors and honored speakers including 2001 TMA Honoree Debbie Allen and Awards Honorary Chair Patricia Hamilton Dewhurst, along with TMA Awards co-chairs Kelli Blanton and Marita Fairbanks, to celebrate the new class of honorees.

Additional honorees for the 2013 TMA Awards will be announced prior to the March 4th reception. The biennial TMA Awards recognizes legendary artists, entertainers and arts patrons of Texas during a series of events held in Austin, Texas, on Monday, March 4, 2013, and Tuesday, March 5, 2013. The TMA Awards begin with a VIP Legislative reception on Monday, followed by Tuesday’s star-studded gala dinner and awards show and the Starlight After Party.

The 2013 TMA Awards gala will be a work of art that incorporates Texas tradition, contemporary art, and pop culture. The visual and auditory feast will incorporate graphic inspiration from the paintings of award-winning Houston artist and professor Aaron Parazette; engaging installations by performance artists The Art Guys; and live performances by luminaries of the arts in Texas including Ray Benson and more. Additional pop culture flavor will be imparted by emcee Chris Harrison, Dallas native and host of ABC television show The Bachelor. The TMA celebration includes an online auction of a Jesús Moroles sculpture benefiting the Texas Cultural Trust. Jesús Moroles received the Texas Medal of Arts Visual Arts Award in 2007 and the National Medal of Arts Award in 2008.

The awards show begins at 8 p.m. on March 5th at the Long Center for the Performing Arts and includes performances by 2004 Young Master recipient violinist Charles Yang, Blue Lapis Light Dance Company, and more surprises. The Starlight After Party begins at 10 p.m. with a performance from raucous Austin band Skyrocket!.

“The Texas Medal of Arts Awards recognizes those who have positively impacted the creative culture of the state,” First Lady Anita Perry said. “People from across the state and from all types of creative expression are honored and celebrated as we cultivate and raise awareness about the arts in our state with the hope of continuing and expanding it for future generations to appreciate, embrace and enjoy.”