Greg Nicotero, the man in charge of creating the zombies of The Walking Dead, that pursue the show’s heroes, joined The Walker Stalkers Podcast with James and Eric, to discuss the show’s zombies and answer fan questions. Nicotero made some stunning revelations about a character's death that didn't happen, discussed his rise to Producer and Director on the show, and even answered questions from cast members Melissa McBride and Chad L. Coleman. 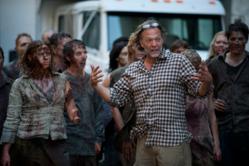 Greg Nicotero on the set of 'The Walking Dead'

"It’s like I’ve become the grim reaper. When they get a phone call from me, they just let it go to voicemail because they think I’m calling to tell them that’s it!”

Everyone knows that the zombies of The Walking Dead have died and come back to life because of a virus, but diehard fans of the show know that they really come back to life because of Executive Producer, Director and special effects genius Greg Nicotero. Nicotero, the man in charge of creating the zombies that pursue the show’s heroes, joined The Walker Stalkers Podcast with James and Eric, to discuss the show’s zombies and answer fan questions.

Greg Nicotero was originally brought to The Walking Dead to lead the show’s special effects and make-up departments. This third season, Nicotero’s role has expanded to Co-Executive Producer and Director. He said that, “It’s the greatest job on the planet.”

The Walker Stalkers’ conversation with Nicotero was an opportunity for fans of The Walking Dead to interact with Nicotero and ask questions about the most popular show on television. Some of those fans included The Walking Dead’s own stars. Melissa McBride, who plays Carol Peletier, asked through her twitter account, “I’d like to know what Nicotero’s interests were as a kid… what was he into?”

Nicotero, who grow up in Pittsburg, lived about 20 minutes away from the Evans City Cemetery where the original Night of the Living Dead was filmed. “I was really bitten by the bug at an early age,” said Nicotero, “I never dreamed in a million years that I would be able to work in the industry.” He originally pursued a career in medicine as a pre-med student. However, on a chance encounter with George Romero, Creator and Director of the cult-favorite Dawn of the Dead, eventually turned into his initial opportunity in the film industry. Nicotero said that from there he, “accident(ly)stumbled upon a job on Day of the Dead,” where he became an assistant to effects artist, Tom Savini.

Later in his career, Nicotero would go on to play a doctor in the film Diary of the Dead, which he said was, “full-circle for him.” Jokingly, he said he was able to show his parents that he did eventually return to the pre-med field.

The Walking Dead’s newest cast member, Chad L. Coleman, who is playing a comic book character favorite, Tyreese, asked Nicotero through his twitter account, “What’s the biggest challenge he faced transitioning into directing?” To which Coleman added his own answer, “Directing Me!!! Lol! Seriously…”

Nicotero replied that, “he (Coleman) is not my biggest challenge, he’s a great actor.” He went on to discuss some of his biggest challenges in directing but made it clear that his career as a make-up and special effects artist has already required him to understand all aspects of film. “You have to understand film on so many levels if you create makeup effects,” said Nicotero, “if you don’t, the effect fails.”

Nicotero then went on to discuss the challenge of directing feature films versus television. “The only thing that made me nervous… was in television you don’t have a lot of opportunity to rehearse. One thing that was very important to me was that the actors have such a unique and organic process… so I spent a lot of time in Season 3 insisting that I have a lot of time rehearsing with the actors, to work out that it feels organic and has a life to it. That’s tremendously important to me that the characters feel real and alive.”

One of the biggest challenges that he faces as Director and Producer is dealing with the deaths of characters on The Walking Dead. “It’s sad knowing the way the scripts come out. I know before the actors know when they’re going to go.” Nicotero continued, “That’s the hardest situation, to be on set and sitting next to someone and you know that the writers are sitting in a room talking about how they are going to kill her off.”

Nicotero revealed that, “In the original draft of that script (The Killer Within), Melissa McBride’s character (Carol) was supposed to die. Iron-E (T-Dog) wasn’t going to die, it was going to be Carol.” He continued, “And there are times when one of the producers has to make that sad call and say, listen, I have some bad news for you. But it changes, you can’t get into situations where you call an actor and go hey dude in episode six I hate to say it but you’re going to be gone. Because, by the time they get to episode six, you know what, we changed that a little bit and Carol’s going to live now and T-Dog’s going to die.”

Now, the cast of The Walking Dead is leery of accepting Nicotero’s phone calls, particularly during the off-season hiatus. He made a random phone call to Melissa McBride one summer to see how she was doing. But instead of the typical hellos, McBride jumped right to, “Why are you calling me? I’m going to die, aren’t I?”

In another instance, when it had been decided that Scott Wilson’s character, Hershel, was going to loose his leg, Nicotero said, “Someone has to call Scott Wilson because he needs to come up to the shop and cast his leg and tell him what’s happening. It’s like I’ve become the grim reaper. When they get a phone call from me, they just let it go to voicemail because they think I’m calling to tell them that’s it!”

Other fans had opportunities to phone their calls into The Walker Stalkers Podcast to try and get Nicotero to offer up some insight into Season 3, which he was understandably reluctant to do. However, he answered many other questions about his filmography and insights into previous episodes of The Walking Dead.

One fan, Danny from Nashville, asked Nicotero what scared him? Interestingly, Nicotero said, “Spiders freak me out. We built some animatronic spiders for a movie and I couldn’t look at them because they freaked me out. We did a movie, Dr. Giggles, and there was this gag where a little kid hid inside of his mom and cut himself out with a scalpel.” Nicotero had a tough time looking at that effect.

Another fan and regular to the podcast, Chris from Milwaukee, asked that if the walkers from The Walking Dead comic book series influence the design of the walkers on the television show. Nicotero answered, “Absolutely. The Comic book walkers have a really specific look – the exposed teeth and rotted away gums, the skinny necks and the shape of their heads – we really used the drawings in the first couple books of The Walking Dead to guide us in that direction. It was very important. We’ve been able to do that between casting and the sculptures and the stuff that we’re doing. We’re trying to stay true to the graphic novel.”

As part of the Nashville, Music City based Podcast’s final question, Nicotero was asked which musician would make the best zombie? Nicotero answered, “Keith Richards, he would take ten minutes and he would make the best zombie ever!” When asked if he had ever made a zombie to look like Keith Richards, Nicotero responded that he had not but that sometimes the zombies will end up looking like someone on accident.

But maybe in the most revealing insight from the Q&A session on The Walker Stalkers Podcast was that not only are the walkers designed to look like the walkers in the comic book series, some of the walkers have been designed as a homage to other films and actors. A couple of walkers on The Walking Dead were created as an in-joke to himself, which pay homage to other films and actors. These are little Easter eggs that have appeared on the show. Specifically, one of these actor's zombified heads are floating in the Governor's fish tank. But no spoilers here, if you want to know who and where to look, you’ll have to listen to the interview on The Walker Stalkers podcast through their website, http://www.thewalkerstalkers.com or on iTunes.

Next week, continuing The Walker Stalkers Podcast series, Michael Rooker, who plays Merle Dixon, will be on the show to discuss his character and hopefully provide some insight into the rest of Season 3 and the soon-to-be release video game, The Walking Dead:Survival Instinct, which features the back story of brothers Merle and Daryl Dixon. Fans can submit questions to Michael Rooker at http://www.thewalkerstalkers.com.