Convicted programmer who faced same prosecutor as Aaron Swartz to speak out for first time at Infiltrate offensive security conference. 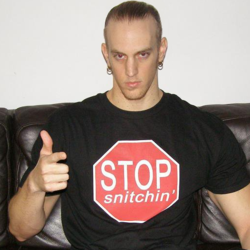 I’m going to tell people the truth about what it’s like to be prosecuted under today’s computer crime laws - from the overzealous tactics of prosecutors to the near-impossibility of thriving in a post-conviction life.

It was the biggest identity theft case in U.S. history - between 2005-2007, 170 million credit card numbers were stolen from Heartland Payment Systems, TJX and other national companies. The operation - known as Get Rich or Die Tryin’ - was led by convicted hacker Albert Gonzalez. But the U.S. Attorney’s Office would later convict former rogue DefCon speaker and Wall Street programmer Stephen Watt of complicity in the crime for writing the packet-sniffing program “blabla” that was used by Gonzalez.

Now, after two years of incarceration in SeaTac Federal Detention Center, a $171.5 million restitution and still on probation, Stephen Watt a.k.a. ‘The UNIX Terrorist’ will be giving his first public talk at this year’s Infiltrate offensive security conference in Miami Beach, April 11-12, 2013.

“We’re happy that Stephen’s lawyer was able to get him approval to keynote at this year’s conference,” said Dave Aitel, CEO of Immunity Inc. and organizer of Infiltrate. “Stephen has a formidable reputation as a programmer and an original thinker, and we’re looking forward to his talk on the criminal justice system as it pertains to com-puter crime. This talk is especially relevant given the recent death of Aaron Swartz, who also faced the same prosecutor as Stephen.”

The title of Watt’s keynote presentation is, “Turning Down an Offer You Can’t Refuse.”

“My talk will be a journey through the legal system; essentially, what to expect if you don’t snitch on your friends,” said Watt. “I’m going to tell people the truth about what it’s like to be prosecuted under today’s computer crime laws - from the overzealous tactics of prosecutors to the near-impossibility of thriving in a post-conviction life. Federal litigation exponentiates fines and sentences by stringing endless amounts of charges together. Most notably, in the case of file-sharing charges. So basically, this talk will cover everything from pretrial, to the courtroom, prison and probation.”

On probation since February 2012, Watt is currently prohibited from using a non-Windows operating system on his government-monitored laptop. He’s also banned from using an iPhone or Android device. “I’m allowed to use a BlackBerry, but they’ve told me ‘there’s just too much you can do on an iPhone,’” he said.

In spite of the severity of his punishment, Watt never benefited financially from his involvement with Gonzalez. While in prison, he also turned down a movie studio offer to option his life story for the big screen. Eric Eisner has since optioned the rights to Rolling Stone’s story on the group, “Hackers Gone Wild: The Fast Times and Hard Fall of the Green Hat Gang.”

Watt remains an opponent of computer vulnerability disclosure and the commercialization of exploit development. He has since developed a passion for discussing matters such as free speech, as well as prosecutorial and investigative tactics as they apply to cybercrime cases.

Stephen Watt’s keynote isn’t the only noteworthy talk at this year’s Infiltrate. Here is a preliminary list of other talks at this year’s conference:

The conference will also include advanced training classes for professionals:

Now in it’s third year, Infiltrate (http://www.infiltratecon.com) is an exclusive offensive security conference for the infosec community, focused on advanced hacks, exploits and all things offensive. Organized by Dave Aitel and Immunity Inc., the conference is April 11-12, 2013 at the Fountainbleau Hotel in Miami Beach. Past speakers at Infiltrate include Charlie Miller, Andrew Cushman, Thomas Lim, Dan Rosenberg, Cesar Cerrudo and Jon Oberheide.