New exhibition brings to light Georgia O’Keeffe’s deep respect for the distinctive cultures of Northern New Mexico and the expansion of her visual vocabulary in the context of American Modernism. 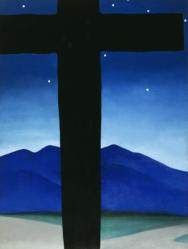 Georgia O’Keeffe explored an extraordinary diversity of subjects between 1929 and 1953, including the architecture, landscape and religious arts of northern New Mexico, said Robert A. Kret, director of the Georgia O’Keeffe Museum

The Georgia O’Keeffe Museum announces the opening of the exhibition “Georgia O’Keeffe in New Mexico: Architecture, Katsinam, and the Land.” The exhibition, which opens May 17, 2013 at the museum in Santa Fe, highlights O’Keeffe’s paintings of New Mexico’s churches, crosses, folk art and Native American subjects, created between 1929 and 1953. Examples include the paintings “Ranchos Church No. I” (1929), “Kachina” (1934), and “Ghost Ranch Landscape” (1935).

O’Keeffe made the first of many trips to northern New Mexico in the summer of 1929, and the importance of the Southwestern landscape and cultures to her artwork is made evident by the fact that she completed at least 23 paintings in that year, many of which are part of this exhibition. The artist’s experience in New Mexico inspired a significant creative shift in her career. Two influential paintings from 1929 will join the traveling exhibition at the O’Keeffe Museum, “Black Cross with Stars and Blue” and “At the Rodeo, New Mexico.” These works demonstrate her exploration of a new environment and experimentation with new colors, forms and compositional strategies. Iconic images of the Southwest, like these, became her enduring contribution to a distinctly American Modernism. The abstract interpretations of Katsinam by contemporary Hopi artists Ramona Sakiestewa, and Dan Namingha will also be added to the exhibition at the Georgia O’Keeffe Museum.

While the New Mexico landscape remained a prominent part of O’Keeffe’s life and art, especially after she left Taos to live and paint at Alcalde, Ghost Ranch, and Abiquiu, very little has been shown or written about her involvement with Native American and Hispanic art and culture; it is popularly assumed that she had none. Yet, almost immediately upon her arrival in New Mexico, she responded to the area’s cultural richness. For example, she attended the Feast Day and Corn Dance at San Filipe Pueblo, and rodeos in Albuquerque and Las Vegas, New Mexico, with Mabel Dodge Luhan and her husband Tony, who was a member of Taos Pueblo. O'Keeffe created numerous drawings, watercolors, and paintings of katsina dolls (carved representations of Katsinam or Hopi spirit beings), also known as kachina dolls, or katsina tithu. Because she retained and seldom exhibited most of these paintings, they remain generally unknown to the public.

“Georgia O’Keeffe explored an extraordinary diversity of subjects between 1929 and 1953, including the architecture, landscape and religious arts of northern New Mexico,” said Robert A. Kret, director of the Georgia O’Keeffe Museum. “While her landscapes are a familiar theme and represent her contribution to a distinctive American Modernism, ‘Georgia O’Keeffe in New Mexico: Architecture, Katsinam, and the Land’ reveals the breadth of experiences that inspired a new direction in her art,” he added. This exhibition was co-curated by Barbara Buhler Lynes, former Georgia O’Keeffe Museum Curator and current Curator Carolyn Kastner.

The exhibition opened in September 2012 at the Montclair Museum in New Jersey, and was reviewed by New York Times writer Martha Schwendener on January 6, who wrote: “And so ‘Georgia O’Keeffe in New Mexico’ includes not only a number of rich landscapes, but also drawings and paintings that delve into some of the central issues and controversies of modernism. Like Gauguin in the South Pacific or Picasso with his African masks, O’Keeffe encountered tribal aesthetic and cultural traditions in New Mexico that were liberating and became integral to her work — but that also set off a complicated battle among cultures, histories and legacies.”

An exhibition catalogue published by the Museums of New Mexico Press accompanies “Georgia O’Keeffe in New Mexico” It includes an introduction by Lynes that discusses O’Keeffe’s interest in aspects of Native and Hispanic culture, along with essays by Kastner, Professor W. Jackson Rushing III, and three Hopi authors: Alph H. Secakuku, Ramona Sakiestewa, and Dan Namingha.

ABOUT THE EXHIBITION:
Georgia O’Keeffe in New Mexico: Architecture, Katsinam, and the Land was organized by the Georgia O’Keeffe Museum. This exhibition and related programming were made possible in part by a generous grant from The Burnett Foundation. Additional support was provided by American Express, the Healy Foundation, Shiprock Gallery, the City of Santa FE Arts Commission, 1% Lodger’s Tax Funding, New Mexico Arts (plus NEA recognition).