Science Fiction Book Marks the Beginning of an Epic Saga. 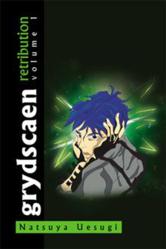 Science fiction aficionados and fantasy lovers are in for an action-packed treat as author Natsuya Uesugi shares grydscaen: retribution. This first volume of his sci-fi series will take them on a mind-battling journey where they will witness an all-out fight with an unexpected end.

Riuho Dejarre, with his psychic powers, was kept as prisoner in the Psi Faction and was experimented on. However, he escapes and goes to the Packrats for refuge, becomes their interim leader, and joins the Terror Hack in an attack against the SenseNet and the Zone Police. Feeling a bad turn on the horizon, Riuho has his memory wiped to protect the Packrat’s secrets, and then goes up against Lino, his half-brother, who is sent to capture and bring him back to the Psi Faction. After a drawn-out psychic battle, Riuho is captured and they go about the painful process of reinstating his memory.

Riuho is rescued from the Psi Faction by the Packrats and then goes on a rampage against Lino using the Packrats as his personal army to settle the vendetta with his half-brother. However, in this war, Lino’s mother is killed. Lino is dead set to get revenge on Riuho, but Riuho has another plan in mind to break Lino’s spirit and take away his freedom.

What destiny awaits the estranged brothers? grydscaen: retribution is only the beginning of an epic saga that will have readers eagerly anticipating the next volume.

About the Author
Natsuya Uesugi has a Master’s degree in International Management and a minor in Japanese. He also studied 2D Animation, character design, and 3D modeling at art school. He likes anime, cosplay, and jumping out of airplanes. He would like to create a manga or graphic novel version of grydscaen some day. He grew up in New York City. He is a Buddhist and has travelled to Costa Rica, Canada, Mexico, Japan, and China.