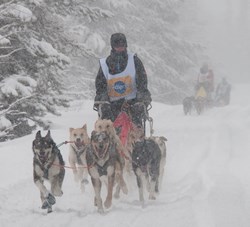 The 2013 running of the IPSSSDR … encountered a snowstorm on day two.

Twenty-one teams from Canada, Sweden, Alaska, Wyoming, Montana, Oregon, Michigan and Minnesota departed on the 8-day, 350-mile International Pedigree Stage Stop Sled Dog Race (IPSSSDR) on January 25, 2013, from Jackson, Wyo., competing for the race’s $100,000 purse. The race concludes on Feb. 2 in Evanston, Wyo., after racing in stages that pass through parts of Wyoming, Montana, Idaho and Utah, making it the first sled dog race to span four states, according to Race Director Frank Teasley. Following an unseasonably warm Jackson Hole start, the 2013 running of the IPSSSDR, the largest sled dog race in the lower 48 states, encountered a snowstorm on day two, with chilly temperatures and snow predicted at least through midweek as the race mushes through Wyoming.

“We were happy to see the cold and snow return for the day two stage, which is just how the dogs and mushers like it,” says Teasley. “Most of the teams trained in the area – many of them in West Yellowstone and Jackson Hole – for the week prior to the race to acclimate to the altitude and conditions.” In addition to checking daily race results on the IPSSSDR website, fans can access photos from the 2013 event, listed by the day of the race, at http://www.wyomingstagestop.org/photo-gallery.php, to check the snow and action as the stages progress.

Following the Jackson start, teams departed on a new route this year, which began with a West Yellowstone, Mont., stage, then travels into Alpine, Pinedale, Lander, Big Piney/Marbleton, Kemmerer, Mountain View and Evanston, Wyo. Race firsts for the 2013 route include the first time for the IPSSSDR racing on a Montana stage, as well as its first time passing through four different states.

The IPSSSDR concludes on Saturday, February 2 in Uinta County outside of Evanston, Wyo. After the big finish, mushers will partner with select students from participating race communities for the Jr. Stage Stop fun race. The kids’ race will be held at 2 p.m. at the IPSSSDR’s North Slope Road Trailhead finish line, 30 miles south of Evanston.

The race’s “stage stop” racing format allows the IPSSSDR to stop in a different community along the race route each night, allowing Wyoming’s host towns to show their hospitality: Festivities for mushers and spectators alike include pancake feeds, dog parades, banquets, carnivals, and snowshoe softball. In addition to the food and fun, the IPSSSDR can boast of being the being the only sled dog race worldwide to have its own traveling band. Screen Door Porch, described as a soulful Americana/Roots-Rock/Folk-Blues project hails from Jackson, Wyo., and follows the race route, playing in the communities along the way.

With its unique stage stop format, the IPSSSDR has become a popular mushing event attracting the world’s top competitors. Pedigree® Food for Dogs is the title sponsor of the IPSSSDR. The Pedigree® brand actively supports a wide range of programs that promote responsible pet ownership and highlight the contributions dogs make to society.

Company Information: The International Pedigree Stage Stop Sled Dog Race was founded in 1996 by Frank Teasley to make sled dog racing more accessible to the public. In addition, the race works to spread the word in support of the need for childhood immunizations—and each year the race makes a contribution to communities on the race route with many communities using the funds for childhood immunization programs. For more information, visit the race website at http://www.wyomingstagestop.org or contact the race at 307.734.1163.

The crowd anxiously watches the mushers on the square in Jackson, Wyoming, at the start of the 2013 IPSSSDR (photo courtesy of Chris Havener)

Screen Door Porch plays for the crowd at Wild West Pizzeria before the West Yellowstone, Montana, leg of the IPSSSDR (photo courtesy of Chris Havener)