Tamils to Obama: Meet with us to discuss future of Tamils in Sri Lanka

Tamils for Obama, a group of politically active Tamils in the US, wrote to the president citing a number of ways that the government of Sri Lanka is committing genocide against its Tamil population. They asked the president to meet with them to discuss the future of Tamils in Sri Lanka. 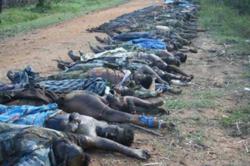 “The president has said that he is not going to get the US involved in any overseas conflicts except to prevent genocide,” said a press spokesman for Tamils for Obama. “We are trying to persuade him that genocide is just what is involved with the Tamils"

Tamils for Obama, politically active group of American Tamils, sent a letter to president Obama asking him to set aside some of his valuable time to meet with them and discuss the deteriorating prospects of Tamils in Sri Lanka.

“Whether the president considers this a worthwhile use of his energy,” said the Tamils for Obama press spokesman, “is an open question. We hope to convince him that it is.

“The president has said that he is not going to get the US involved in any overseas conflicts except to prevent genocide,” said the press spokesman. “We are trying to persuade him that genocide is just what is involved with the Tamils in Sri Lanka.”

The letter began with congratulations on Mr. Obama’s re-election and second inaugural address.

“Of course, we and other Tamils expect some help from this president. We have supported him in two elections. We expected that he would understand our situation and our suffering, and that he would use his vast influence to help us out.

“We have been waiting for four years,” said the spokesman, “and so far nothing has happened. We are still waiting for his help."

“In our letter we cited several of the United Nations’ definitions of genocide, each of which, we think, describes the Government of Sri Lanka’s treatment of Tamils,” said the spokesman. “We hope that this will impress the president with the seriousness of the Tamils’ situation.”

The letter continued “Let us also tell you what is on our minds. The Sri Lankan civil war, which was still raging when you were elected in 2008, ended in 2009. The victor, the national government of Sri Lanka, has taken this as a signal to brutalize and repress (even more harshly) the minority Tamil population."

“The government is driving Tamils out of areas they have lived in for centuries. The government is resettling these areas with majority ethnic Sinhalese. Driving one population out and replacing them with another—ethnic cleansing--is one of the UN’s definitions of genocide, which we know you are against.

“The government used anti-personnel weapons against the Tamil civilian refugee population during the war, deliberately killing Tamils. This is another of the United Nations’ definitions of genocide.

“The current Tamil population in the north and east of Sri Lanka includes large numbers of widows with children and single women with little chance of marrying. These women have no resources and no means of gaining resources, and are regular victims of Sri Lankan soldiers’ sexual extortion and opportunism. “Inflicting… conditions of life calculated to bring about its physical destruction…” is another of the UN’s definitions of genocide.

“Young Tamil women are regularly seized and sent to brothels in southern Sri Lanka. This kidnapping and forced prostitution amounts to slavery, and these young women are certainly not going to bear healthy Tamil children. “Imposing measures intended to prevent births within the group” is yet another of the UN’s definitions of genocide.

“We concluded,” said the spokesman that “‘We hope and trust that you will take measures to help create a peaceful and safe refuge for our Tamil brothers and sisters in the north and east of Sri Lanka. We have supported your campaigns and efforts with our time, votes and resources. We hope you will meet with us to discuss the future of Tamils in Sri Lanka.’”