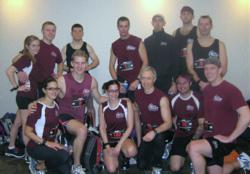 Gentle Giant Moving Company, an award winning national moving company, will apply their 33 years of experience running stairs on the job to the American Lung Association’s “Race Up Boston Place” Fight For Air Climb this Saturday, February 2nd at 9am inside One Boston Place. Fight for Air Climbs take place in cities across the country in skyscrapers, stadiums, and arenas and are unique fundraising events for the American Lung Association.

Often called a "vertical road race", teams of all types, including firefighters and EMTs, raise funds and awareness to support the Lung Association’s mission to save lives by improving lung health and preventing lung disease. The more than century-old charity hopes to raise $365,000 at the Race Up Boston Place event this year to help fund research to treat, prevent and cure lung diseases and support efforts including clean air and tobacco control advocacy; asthma education for families and schools; and smoking prevention and cessation services.

Since 2007, Gentle Giant Moving Company has assembled record setting teams consisting of employees of all ages and backgrounds ranging from movers, to salespeople, and department managers. This year, the local and long distance moving company has assembled a nine person team that has already raised 88% of their $1500 goal. Gentle Giant Move Coordinator and Race Team Captain Catherine Brinkley is proud to contribute this amount to the nearly $8000 the company has raised for the American Lung Association over the past six years.

“Employees at Gentle Giant Moving Company care a lot about fitness, community involvement, and running stairs,” explains Brinkley, “which is a big part of why the Race Up Boston Place has been such a successful event for us.”

Gentle Giant has a slight advantage at the Race Up Boston Place, for running stairs has been at the core of the company’s culture ever since Founder and CEO Larry O’Toole created the tradition of taking every new hire out to the Harvard Stadium to run the stairs of all 37 sections of the Stadium.

This Saturday on race day, each team member will run up all 789 stairs of the 41 story building as fast as they can. The top five individual times from each team will comprise the team’s total time. If Gentle Giant records the fastest team time this year, it will mark the 7th year in a row they have won the race. At the end of the 2012 Race Up Boston Place, Gentle Giant recorded the fastest team time, the top two individual male times, and Captain Catherine recorded the fastest individual female time.

To cheer on the Giants, or any of the other great teams, head over to One Boston Place this Saturday morning at 9am!