According to a recent study only 3% of apparel can claim to be Made in the USA. Kowalli LLC, makers of The Kowalli Baby Carrier Cover, is proud to announce that 100% of their manufacturing and sourcing is done domestically. 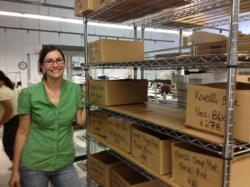 Brenna Nan Schneider, Director of Operations at American MOJO in Massachusetts, shows off an organized shelf of Kowalli production pieces

"There's a new definition these days for Made in the USA," says Kowalli Founder Alizah Holstein.

But the tide might be starting to turn. A recent study published in the MIT Technology Review concluded that 14% of companies are planning to restore some or all of their manufacturing to American soil. Reasons are varied, but many claim that domestic manufacturing will reduce the total cost of ownership (as opposed to the cost of labor), avoid large surges in inventory, encourage innovation, and reduce waste. In addition, as Holstein found, companies with local manufacturing are often able to respond more quickly to the changing needs of their customers. “Instead of waiting five months to complete a production run and receive the goods, our average wait time at Kowalli is under four weeks. That’s pretty hard to beat.”

In addition, American manufacturing is enjoying a thorough re-branding. "There's a new definition nowadays for Made in the USA," says Kowalli Founder Alizah Holstein, who considered producing overseas when she started her company in 2009. "To me, ‘Made in China’ meant questionable quality, glacial delivery times, and huge order quantities. Made in the USA is the opposite of that – to me it spoke high quality production, quick responses to my customers’ changing needs, and making only what I know I can sell. It’s lean manufacturing, and it’s cutting edge.”

In addition to manufacturing in the US, Kowalli also sources its materials locally wherever possible. The Kowalli Baby Carrier Cover, the product for which the company is best known, is made of Polartec fleece, which comes from Massachusetts. Even the elastic we use is local, coming from a Pawtucket, RI factory that has been around for more than half a century. “These businesses are the roots that grew the tree of our modern economy,” says Holstein, “and people are sometimes surprised to learn that they still exist. But many of them do, and they’re producing exceptional product.”

For Holstein, however, the most compelling aspect of manufacturing in the US has been that it just might be a good thing for society at large. “People think of apparel manufacturing as low wage work that offers no future, but it doesn’t have to be that way.” She cites American MoJo (Mothers for Jobs), a socially responsible Massachusetts sewing contractor that handled Kowalli’s last production run. By offering health care, retirement benefits, and fully subsidized childcare to their workers, MoJo hoped to fulfill their mission of lifting single mothers and their children out of poverty. Unfortunately, their mission was never fully realized as they were unable to raise the necessary capital. "We were very excited to be working with Brenna Schneider at MoJo, mostly because her passion for her work was so contagious. We felt like we were part of something visionary, an operation doing real good in the world. Plus the workmanship was top notch."

The effort to be branded Made in the USA has paid off for Kowalli. Customers continuously express appreciation for their participation in the American Made movement. Could there be a star-spangled line of baby products in the works? Says Holstein, "It's a possibility, stars and stripes are very spring trendy!"