New book follows the tales of men who emerged as victors or losers in a game of chance and sheer grit. 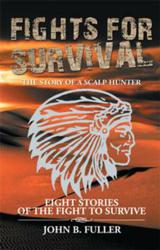 In order to live, one must survive. Author John B. Fuller reveals a riveting compilation of eight short stories that tells how different men endures the harsh reality of life and come out of the rubble alive with his new publication, Fights of Survival.

Men fight for all sorts of reasons, but none as powerful as the will to carry on despite the many trials and hardships they face. It is their basic instinct to dwell in a world of catastrophe but never lose hope to triumph over them all. Fuller has skillfully written tales that deeply explore the dark aspects of human nature, their weakness that leads them to doom and their admirable strength and will to survive amid the mountains of obstacles in their paths.

His stories revolve around men who have normal lives, who feel pain and suffers from loss. One tells of the hardship a man named Tom has to conquer when his farm was ambushed by rebels. He suffered the loss of his two sons, the abandonment of his own daughter and was captured by Indians to be subjected to various forms of torture. With all the torment and misery he’s been through, will Tom be able to make it out alive?

The other tales have the same theme. The characters experienced a loss, a prick of conscience, being torn between doing what is right and what is good and arriving at a destination none of them expected but pleased to find themselves in. Their journey is never easy, but it is something that teaches them a valuable lesson on how to attain the ultimate goal in life—to survive.

Fuller’s Flights for Survival is one engrossing book that daringly blends creative imagination with the thorns of reality, creating stories that do not only appeal to the mind but touch the heart as well. Readers will find this book gripping and heart-wrenching, and at the same time, deeply moving and inspiring.

About the Author
John B. Fuller was born on October 29, 1925. He attended Sir George William and has master’s degree in Adult Education from St. Francis Xavier. A war veteran, he also worked in North and Eastern Canada in construction and engineering, taught in N. S. Community college and retired as vice-principal. At the age of 86, he decided to write memoirs, and now at 87, he’s working on his fifth book. Is the first to be published. He lives in Rural Cape Breton Island, part of Nova Scotia with his small dog named Shoo Chew whom he considers as a friend and a companion.
Fights for Survival * by John B. Fuller
The Story of a Scalp Hunter
Publication Date: January 29, 2013
Trade Paperback; $15.99; 82 pages; 978-1-4797-6215-6
Trade Hardback; $24.99; 82 pages; 978-1-4797-6216-3