Urban Oyster, a New York City tour company, is developing a new food tour of the New York City waterfront that will focus on supporting the neighborhoods and local businesses hit by Super Storm Sandy. To help them make the tour a reality, they have launched a campaign through crowdfunding site SmallKnot. 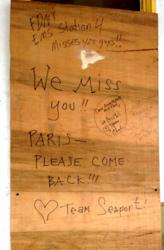 ...After the storm we realized that the tour was needed more than ever as many businesses were continuing to struggle.

A local New York tour company, Urban Oyster, is doing its part to aid in the recovery from Super Storm Sandy. They are launching a food tour of some of the hardest hit neighborhoods that is designed to bring much needed dollars and people into the businesses that are still struggling to recover. In order to help them launch the tour as soon as possible, Urban Oyster is hoping to raise $15,000 through a campaign on crowdfunding site SmallKnot.

"We were actually in the process of creating the tour prior to the storm," relates Urban Oyster owner David Naczycz, "and after the storm we realized that the tour was needed more than ever as many businesses were continuing to struggle." A stroll through any of the affected neighborhoods proves Naczycz correct. The Seaport area, once bustling with tourists, feels more like a ghost town. Many of the businesses remain closed as do nearby office buildings whose workers once patronized the local restaurants. As David shared with us, "This story has fallen out of the news as of late and people don't realize that many of these areas are still reeling from the storm. Some still don't have electricity! Our goal is to bring people back into the neighborhoods, build awareness, and get cash flowing again."

The tour will cover the vast history of food along the Manhattan and Brooklyn waterfronts where many historical buildings and piers still remain today. Today, as the waterfront has changed from a working waterfront to new uses, including recreational and residential, food entrepreneurs are making their way back to the water and opening new businesses. The tour will visit many of them where attendees will have the opportunity to taste their wares and purchase some to take home. The tour will also be unique in that it will visit both Manhattan and Brooklyn. Groups will start in the Seaport area and then be ferried across the river by New York Water Taxi to complete the tour in Brooklyn. Urban Oyster hopes the tours to create lifelong customers for these small food operations and, at the very least, people take advantage of the opportunity to buy delicious treats to take home.

When asked how the residents will feel about tours coming through Naczycz responded, "This is not disaster porn. We aren't bringing buses through for people to take pictures of boarded up stores. These are small group walking tours that will bring locals and visitors back these neighborhoods as customers." Naczycz also added that they have worked closely with the neighborhoods to ensure the tour has a positive impact. They plan for a portion of the ticket price to be a donation to recovery efforts and they are partnering with a number of companies and organizations to make the tour a reality including the Red Hook Initiative and the South Street Seaport Museum.

Tours are expected to begin this April. In the meantime, people can purchase discount tickets and support the tour development through the crowdfunding site: http://smallknot.com/urban-oyster Regular ticket sales will launch in the coming weeks. Information and tickets will be for available at http://www.urbanoyster.com or http://www.nywatertaxi.com

Urban Oyster is a New York-based tour and events company, founded in 2009. The company has created multi-sensory, theme-based tours and events in New York City which aim to reveal the stories behind the people and places that make the city's neighborhoods unique, vibrant, and sustainable. Each tour and event celebrates local people, businesses and institutions and serves to connect people directly to these outstanding and vital resources. By doing so, Urban Oyster hopes to contribute to vibrant and sustainable local economies. Urban Oyster offers a variety of regularly-scheduled public tours and events as well as offering private tours and events that are enjoyed by native New Yorkers and visitors alike. http://www.urbanoyster.com