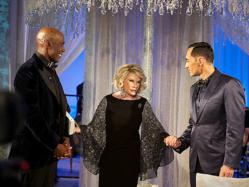 "...every wedding I officiate has a cover charge and a two-drink minimum." -Joan Rivers

One of the Universal Life Church Monastery's celebrity ministers, Joan Rivers, recently performed a high profile wedding for Preston Bailey, and his newly wed partner Theo Bleckmann. The Universal Life Church Monastery ordained Joan Rivers [Rosenberg] on February 6, 2013, and she received her free ordination the same day, just a week prior to the marriage of the couple. The event, imagined after the King Kong movies, took place on Valentines day atop New York's Empire State building, and was attended by more than 200 guests. The food theme was “great pairings,” and things like peanut butter and jelly were a large part of the unique menu, Joan Rivers was quoted saying that she was "[t]hrilled to be an ordained minister....every wedding I officiate has a cover charge and a two-drink minimum."

The marriage of Preston and Theo wasn't the first time that The Monastery has been involved in equal rights weddings. In June of 2011, The Monastery flew ministers to New York City to help officiate and wed the many same-sex couples trying to tie the knot with a Pop-Up chapel. This action, and the 179 ministers ordained just after the Marriage Equality Act passed in New York, helped alleviate the strain on the courts and churches who were performing gay marriages. The ULC Monastery has a long history of helping out the LGBT Community, and continues to make efforts to unite people through marriage and its inclusive religious beliefs.

The Universal Life Church Monastery is a non-denominational church headquartered in Seattle. Anyone can legally become a minister by visiting the ULC’s website and submitting their information there. The website also features a catalog of minister supplies and a number of articles about how to perform weddings and other religious ceremonies. The Universal Life Church has ordained over 20 million ministers around the world. For more information concerning the legality and process to become ordained please go to http://www.themonastery.org/
Sources:
Tiffany, Fraiser. "PRESTOBAILEY AND THEO BLECKMANN." New York Times 15 02 2013