Twisted Ways is a puzzle game for iOS and was created to feed the most strategy and logic cravers among the pool of players. This stimulating game app is set to challenge rational and analytical skills all the way and have think twice before making the next move. 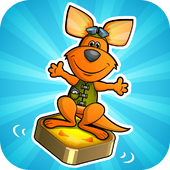 An awesome entertainment for the brain

Picture walking on sky-high blocks and your life depends on every move you make. Game character, a kangaroo, can move from one block to another until it reaches the ladder that will take him to the next level. Easy as it sounds, it’s about to get tougher.

Twisted Ways is “an awesome entertainment for the brain as it makes you double think every new step you’re about to make. For the ones passionate about puzzle and strategy games, Twisted Ways will surely challenge you in so many unexpected ways. The most amusing part of the final development stages was when I had friends try it. After watching the demo video, they set off thinking it’s going to be pretty easy. Soon enough, the situation took a twist and they were having difficulties passing levels without making a strategy or pondering before their next move”, says Stanislav Fedorov, the app developer.