Dagbé, a new U.S.-based nonprofit organization, aids victims of child trafficking and children in other crisis situations in Benin, West Africa, by empowering local communities to care for their most vulnerable residents. 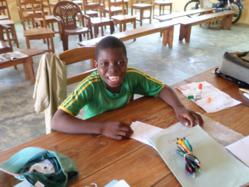 Before we came along, children in central Benin had no place to turn to when they found themselves in crisis situations

Dagbé, a new non-profit organization based in Boston, Massachusetts, has launched efforts to assist victims of child labor trafficking in the West African nation of Benin.

Dagbé (pronounced dhag-BAY) works with communities in rural Benin to provide critical services to children affected by extreme poverty, including victims of trafficking, abuse, and orphans. The organization is the only resource of its kind in the local area, serving children who would not otherwise have safe lodging, nutritious meals, quality healthcare and the opportunity to attend school.

“Child labor trafficking is a major issue in Benin, and the country’s relative obscurity means not many people are aware of the problem,” says Sebastián Seromik, founder of Dagbé. “In the central region of Benin where we operate, the problem is particularly acute since the area serves as the farming center of the region. Desperate but well-intentioned families place their children with middlemen who promise work and income, but the result is often an abusive situation where the child is cut off from family, school and healthcare.”

Dagbé began as a project developed by Seromik and other former Peace Corps Volunteers while serving in central Benin. “One instance had a profound impact on me. Seven children were found, trafficked from neighboring Togo. The community was forced to lodge them in the local jail for lack of other safe options.” says Seromik. “I was shocked. They were all alone and the community was ill-equipped to help them. Something needed to be done.” A community-based residential care facility was constructed in 2009 in Ouèssè, Benin and operations have since expanded.

“We’re keenly aware of the importance of our work, knowing that we’re the only organization providing these services in this region,” says Seromik. “Before we came along, children in central Benin had no place to turn to when they found themselves in crisis situations.”

Dagbé has also launched a campaign aimed at preventing future trafficking cases. In July 2012, Dagbé sponsored an anti-trafficking training seminar with 45 participants representing villages throughout the area. The seminar was also broadcast over community radio in local languages, reaching an estimated 15,000 listeners in the most remote areas of the region. “Our goal is treat these situations proactively,” says Seromik. “Our vision is of empowered communities which have come together to end this awful practice.”

In addition to its work in preventing child trafficking and caring for its victims, Dagbé also has programs supporting families affected by extreme poverty, promoting education and youth development, and is also developing a social enterprise initiative aimed at fostering the long-term sustainability of their efforts.

The word Dagbé comes from a term in the local Fon-Mahi dialect which means, “To do good.” For more information on Dagbé, visit their website at http://www.dagbe.org.