Enter for a Chance to Win a Pair of Tickets to Robert Dubac's The Male Intellect: An Oxymoron? at the Macomb Center, this Saturday March 2

"Like" Robert Dubac on Facebook and you can enter for a chance to win a pair of tickets to his hilarious, award-winning, audience and critically acclaimed show The Male Intellect: An Oxymoron at the Macomb Center for The Performing Arts. Two shows - 2PM and 8PM. 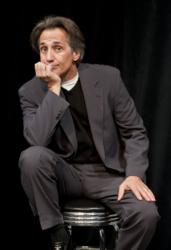 Robert Dubac in The Male Intellect: An Oxymoron

"There are two kinds of people who should rush and see it: men and women."

Robert Dubac brings his scorching and hilarious look at the differences between Men and Women to the Macomb Center for the Performing Arts on March 2nd! To celebrate, Robert and the Macomb Center are giving away two pairs of tickets to each show - 2PM and 8PM.

Dubac isn't one to bash men or women. He zings both equally and without hostility. He makes the process funny and entertaining, and his sharply written, nicely put together, skillfully presented show certainly is that. It is adeptly conceived, refreshingly and comically stated, and he has no trouble keeping it up for a quite diverting 90 minutes.

Don't miss the opportunity to see The Male Intellect which is at The Macomb Center for one day only on March 2 for two shows - at 2:00PM and 8:00PM. The Male Intellect is a crafty and thought-provoking concoction, a show of emotional depth and understanding. Dubac has a winning charm and the play has a doozy of an ending.