Henry Presents on Expanding Consciousness at 'Becoming a Galactic Citizen' 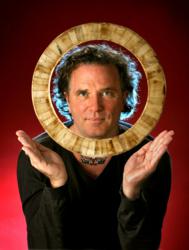 The Spring Clinic is planned to be a weekend of inspiration and personal reflection, focusing on the topic of expanding beyond individual and planetary consciousness.

Author, Investigative Mythologist, and Host of "Revelations" Radio, William Henry, has been announced as the Keynote Speaker at the Spring S.T.A.R. Clinic, Becoming a Galactic Citizen.

The S.T.A.R. Clinic (an acronym for Surrender, Trust, Allow, Receive) will be hosting the Clinic in Tucson, AZ from March 22-24, 2013. S.T.A.R. Clinic presents new concepts and experiences to the field of healing by bringing together cutting-edge thinkers, scholars and trans-dimensional practitioners as well as offering a line of ‘Quantum Tools’ which assist in the raising of consciousness. The Spring Clinic is planned to be a weekend of inspiration and personal reflection, focusing on the topic of expanding beyond individual and planetary consciousness.

Internationally renowned as a guide into the transformative power of art and symbols of human ascension, Henry has been documenting humanity’s awakening to its spiritual magnificence for over 20 years. He is the author The Judgement Day Device and The Secret of Sion and lectures around the world on supernatural topics.

In addition to Henry, other speakers will include author and spiritual visionary, Nina Brown, harmonic mathematician, Randy Masters, Ph.D., galactic astronomer, Norma Tarango, and trans-dimensional healing practitioner, Vladimir Turek, among others. The Spring Clinic will be held in the Conference Center at the Tucson Hilton El Conquistador Golf & Tennis Resort nestled in the foothills of the Santa Catalina Mountains.

Both in person and virtual participation will be available. The Clinic will offer several presentations throughout the weekend, including Henry’s, webcast via livestream. Community Center Broadcasts are expected to be available, bringing people together in various regions to participate as a group through the livestream option.

For more information about the Spring S.T.A.R. Clinic or the virtual attendance options, visit: http://www.crystalsinger.com/events/mar-222324-tucson/

About the S.T.A.R. Clinic:
The S.T.A.R. Clinic was founded by Nina Brown to provide a service of healing and education to communities around the world. It hosts conferences, webinars and intensives, and offers a line of Quantum Tools which help spread the central message of Brown’s book, Return of Love to Planet Earth, Memoir of a Reluctant Visionary: inspiring and supporting participants to awaken to their human-divinity. Brown’s new book, which further expands into the teachings of the S.T.A.R. Clinic, S.T.A.R. a NOW State of Being, will be available March 2013. For more information, visit: http://starclinic.org/