No Limits Media is proud to announce a special presentation of the film, Two Who Dared: The Sharps' War, hosted by the USHMM at the Boston Public Library on March 13th. 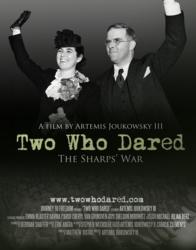 "Our mission is to inspire the next generation of Martha and Waitstill Sharps. Share your story of when you dared to make a difference!"
Artemis Joukowsky III

There will be a special presentation of the documentary film, Two Who Dared: The Sharps' War in Boston on March 13th. Hosted by the United States Holocaust Memorial Museum, Two Who Dared tells the story of a Unitarian minister, Waitstill Sharp and his wife Martha who, just days prior to the Nazi invasion of Czechoslovakia, left their young children in Wellesley, Massachusetts to help save thousands being persecuted in Eastern Europe. Who were these American heroes? What drove their willingness to put the well-being of strangers over that of themselves and their family?

The documentary is told from the point of view of Martha and Waitstill, drawing on their recorded interviews, letters and unpublished memoirs, and includes interviews with rescued children and noted Holocaust scholars.

Partnering with Facing History and Ourselves to increase educational outreach for Two Who Dared, an educational curriculum has been developed and will go out to 28,000 educators in the Spring. Facing History and Ourselves is an international educational and professional development organization whose mission is to engage students of diverse background in an examination of racism, prejudice and antisemitism to promote the development of a more human and informed citizenry.

Two Who Dared has received a number of awards and recognition: