The Musgrave's debut album “You That Way I This Way” will be released in the US on OK! Good Records. Available now for purchase as a digital download from the label website (http://okgoodrecords.com), the 11 song album will hit major online and retail music stores on April 16. 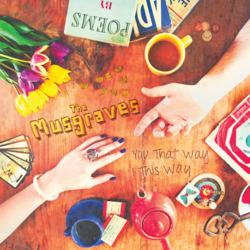 The Musgraves - You That Way I This Way

Beautifully crafted Pop-Folk songs that capture a tremendous sense of effortless energy and emotion showing a song writing ability well beyond their years and far above that of you’re average band. Undoubtedly they have potential to go far

UK roots-pop four piece, The Musgraves, sing of love and heartbreak like many of their folk-influenced contemporaries, but do so without the frequently prevailing melancholy. This brighter, more cheerful quality clearly reflects the band's influences of early rock and roll from the Phil Spector era to Motown, producing a sound that could be described as something like The Beach Boys meet Mumford And Sons. Armed with acoustic guitars, violin, banjo, glockenspiel and of course Matthew Bennett’s soulful voice, The Musgraves deliver uplifting pop songs, with simple hooks designed to be catchy and memorable.

The Musgraves' 11 song debut album “You That Way I This Way” is set to release in the US via OK! Good Records (http://okgoodrecords.com) on April 16, and could quite possibly be the anti-depressant to the recent surge of bitter-sweet anthems of love and loss from bands like The Lumineers, Of Monsters and Men, and The Head And The Heart.

So far, The Musgraves have already managed to make quite the name for themselves on their home turf. With a “Q The Music Track of the Day” in the bag and a BBC 6 Music Record of the Week for the infectious “So Sofia,” further airplay on BBC Radio 2 and Q Radio, plus growing support from regional radio stations across the UK, this Midlands based roots-pop four piece has established themselves as “ones to watch.”

British Telecom (BT) adopted the band in 2011 using an instrumental of their epic ballad “Discover Me” as the bed for the “Adam and Jane” TV wedding campaign.
The debut single, “Last Of Me,” has already been championed by Graham Norton on his BBC Radio 2 show. The track explores the imminent end of a long-term relationship – the loss of love, friendship and, ultimately, identity – but, in true Musgraves style, it sits on a feel-good alt-pop arrangement, brimming with 50s and 60s pop/soul influences.

“…Beautifully crafted Pop-Folk songs that capture a tremendous sense of effortless energy and emotion showing a song writing ability well beyond their years and far above that of you’re average band. Undoubtedly they have potential to go far…” - BBC West Midlands

“…The freshness and enthusiasm of these musicians has been coupled with mature song writing and a polished production sound rarely found on a debut independent release. The result is folk-infused alt-pop at its best…” - The Line of Best Fit

The Musgraves - “You That Way I This Way ” Track Listing

About OK! Good Records: OK! Good Records is an independent record label based in the New York City area. Founded in 2011 as an outlet for unconventional, evocative, and genre-defying music, OK! Good's mission is to pluck talented artists from all corners of the global landscape and present them to the American public. Visit http://okgoodrecords.com for more information.