"Jesus, King of Edessa" - a new book by Ralph Ellis - discovered the biblical Jesus in the historical record. Contemporary coins and statue of Jesus discovered in Syria. 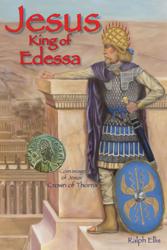 King Jesus of Edessa, wearing his Crown of Thorns

Why is Jesus missing from the historical record? Jesus was an influential king (the King of the Jews) and probably the most famous monarch of the last two millennia, so why cannot we find archaeological evidence for his life? The answer is that we have been looking in the wrong location.

Following 25 years of research, Ralph Ellis has discovered that Jesus was a prince of Edessa in northern Syria. The Edessan monarchs were Nazarene Jews who helped build the Temple of Jerusalem and saved Judaea from starvation during a great famine. But, just like Jesus, they were also religious and political revolutionaries who tried to take control of Judaea, but were thwarted by the Roman Army. Thus there are many links and similarities between the biblical accounts and the princes and kings of Edessa.

However, in addition to this, Ralph Ellis has discovered that one of the princes of Edessa had the same names as Jesus. Jesus was called (King) Jesus Emmanuel, while one of the Edessan monarchs was called King Izas Manu(el). Equally interesting, is the fact that all of the Edessan monarchs wore a plaited Crown of Thorns. The biblical Jesus was crucified wearing this same plaited Crown of Thorns because he was this very same prince and king of Edessa.

Thus we now know who Jesus was, where he lived, and who his family were. Visit his city, see the ruins of his citadel, gaze upon his statue, handle his coins. In reality, Jesus was a son of King Abgarus au Kama of Edessa, a minor princeling with a small realm, a large treasury, and even bigger ambitions. But the so-called Wise Prince of northern Syria came up against an intractable Rome, and his many plans crumbled to dust. The historical records then indicate that this revolutionary prince of Edessa was crucified outside Jerusalem, along with two other leaders of the revolt, but he was reprieved and taken down from the cross by a man called Joseph(us). And yes, this familiar-sounding account is from the historical record, and not from the gospels.

Readers might imagine that the true history of this region might undermine much of the biblical story that the gospel authors have crafted. But in reality the gospels always did say that Jesus was a Nazarene (Mat 2:23) and a king (Luk 23:38), and so this new analysis changes very little in the gospel story. The only real difference is that the true history of the region indicates that the strategies and goals of King Izas (King Jesus) were much more far-reaching than the gospel accounts like to admit. In reality, the goal of King Izas and the Edessan monarchy was to use their newly united Kingdom of Judaeo-Syria as a springboard to take over the throne of Rome. Yes, King Izas (King Jesus) wanted to become Emperor of Rome - which is why he was so closely linked to the Roman 'Star Prophesy' (the eastern star at his birth), and why he suffered a Roman rather than a Jewish form of punishment.

This is a scholarly study of all the available historical evidence, including the Tanakh, Talmud, Josephus Flavius, the Roman historians, and venerable Syriac historians like Moses of Chorene and Yohannes Drasxanakertci.

Sample article from the book:
http://www.edfu-books.com/edessa.html

King Izas-(Em)Manuel's plaited Crown of Thorns..... Note the straight nose profile, which is typical of all the Edessan monarchs.