Author Roy G. Williams’ New Book Reveals the Journey of The Jamaican-Canadian Association from 1962 to 2012

This informative book is the author’s better way to preserve, present and recount this remarkable journey. 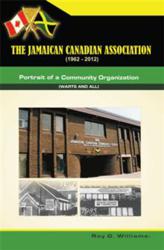 Author Roy G. Williams makes a bold attempt to preserve, present, and recount the journey of The Jamaican-Canadian Association (1962-2012) through the release of this informative book. Readers will join the author as he delves deeper into the association’s promising flight for five decades.

Now on its 50th year and will start its 51st in 2012, this organization thrive and continues to flourish in the context of social-historical structure. This book attempts to chronicle its origin, its struggles and survival, its accomplishments, and activities that take place at the JCA. Those 50 years of surviving the tests of time is phenomenally historic. Why has the JCA survived when so many others have failed? The contents of this book may reveal the survival formula.

The road has not been easy. The path has not been clear, but survive it has—with solid accomplishments. With this release, readers can explore the foundation of The Jamaican-Canadian Association (1962-2012) and discover the secrets on how it has survived for 50 years and still is looking forward to many more years.

About the Author
Roy G. Williams was born in the Parish of St. Mary, Jamaica, but grew up in Mandeville Manchester. He has a Diploma in Business (Accounting Specialty), a BA degree in Business Administration, Master’s Degrees in Business Administration and in Economics, and has fulfilled all requirements for the Ph.D. sans thesis. He worked with the Toronto Globe and Mail, then at Ryerson Polytechnic Institute. He retired in 1994 after 34 years at Ryerson University with the title of Professor Emeritus. He returned to Jamaica in 1995 and held the position of Professor Management and Organizational Behaviour at Northern Caribbean University until 2007 when he returned to Canada. He has been an entrepreneur having owned businesses in real estate, entertainment, ethnic foods, and beauty salons. He was the founding President of the Jamaican-Canadian Association and served in that position from 1962 to 1966. He served again as President from 1984-1989. He was the first person of colour to serve as a Commissioner on the Metropolitan Toronto Police Services Board. Before serving in that position he was a member of the Board of Directors of the Ontario Place Corporation. Williams was a member of the Race Relations and Policing Task Force headed by former judge Clare Lewis. He has received many awards some from the Jamaican-Canadian Association, The Ontario Ministry of Citizenship and Culture and the prestigious Harry Jerome Award for Community Service from the Black Business and Professional Association. He is married and has five grown children. Williams has decided to spend a portion of his retirement time to write this book which is his 50th anniversary commemoration of the Jamaican-Canadian Association.