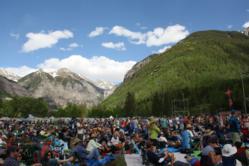 Telluride plays host to over twenty unique festivals each year ranging from popular live concerts to absolutely nothing at all.

It might be snowing here in Telluride... but the summer festival season is already beginning to heat up! Head to Telluride.com for updated information on schedules, lineups, ticket sales, activities and exclusive discounted lodging for the 2013 festival season.

Each summer, thousands of people flock to the jagged San Juan Mountains of Southwest Colorado in search of their own unique celebration. Bluegrass, Wine, Yoga, Jazz, Mushrooms, Film, Arts, and Blues… just to name a few. And on the one weekend when there’s absolutely nothing going on in town, there’s even the infamous "Nothing Festival" to keep you busy.

A handful of the favorite summer festivals have just recently released headliners, lineups and other information:

Haven’t been to Telluride? The town was founded in 1858 after gold and silver were discovered, Butch Cassidy robbed his first bank here, Nikola Tesla selected the site to build the world’s first power plant, hippies re-settled these lands in the 60’s, skiing arrived in the 70’s, real estate agents invaded in the 80’s, Tom Cruise, Oprah and Oliver Stone call it vacation, and Tim McGraw even wrote a song about it. On Memorial Day Weekend every year, this small mountain town kicks off one of the most-anticipated festival lineups in the nation.

Artist on main street during the Telluride Jazz Festival

Mumford and Sons at the 2011 Telluride Bluegrass Festival

Free Gondola is a must-do when you visit Telluride