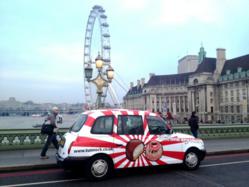 With a nostalgic association with the comfort of your grandparents’ house, Tunnock’s are transmitting their sentimentally-fuelled biscuits to the now grown-up grand-children who are busy in their daily commutes and fast-paced lifestyles.

A long-running purveyor of Scottish heritage, Tunnock’s are promoting their much-loved range of edible treats with the launch of the ‘Take one anywhere’ concept. London Taxi Advertising are organising a fleet of fully-wrapped taxis which are to circulate central London over an entire year, promoting the idea that you can take your Tunnock’s product outside of the conventional relaxation area of your home.

Backed by a circus-style sunburst stripes pattern, the adverts feature high-quality photographic images of each product, with clear text indicating the individual biscuit names. Footed by the slogan ‘Take one anywhere’ alongside the Tunnock’s logo and website, the graphic benefits from the tempting combination of exploiting hunger and the recognition of a distinct brand image. The use of full taxi liveries along with passenger tip seats allows the recognisable Tunnock’s name to publicise itself on a high frequency in one of the UK’s most frequented public regions, both on a widely visible external level and also with the increased dwell time facilitated by internal adverts.

With markets stretching as far out as the Caribbean and Japan, Tunnock’s have opted to appeal to the metropolitan hub of London through fully wrapped taxi livery advertisements. With a nostalgic association with the comfort of your grandparents’ house, Tunnock’s are transmitting their sentimentally-fuelled biscuits to the now grown-up grand-children who are busy in their daily commutes and fast-paced lifestyles. London Taxi Advertising has dedicated specialists who are fully experienced in the advertising market, allowing Tunnock’s to be fully guided in reaching a target audience with the broad coverage offered by a London taxi.