Selection of King’s Daughters Medical Center on list of “Best Hospitals for Patient Experience in Obstetrics” is based on women’s preferences, recommendation rating and clinical excellence. 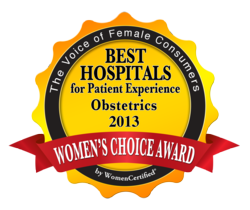 King’s Daughters Medical Center has received the Women’s Choice Award from WomenCertified® distinguishing it as one of the 2013 Best Hospitals for Patient Experience in Obstetrics. The award is based on robust criteria that include female patient satisfaction measurements as well as clinical excellence considerations. WomenCertified represents the collective voice of female consumers and is a trusted referral source for top businesses and brands identified as meeting the needs and preferences of women.

Women make or influence more than 90 percent of health care decisions for themselves and their families, according to a study published by the American Academy of Family Physicians. The Women’s Choice Award signals that a hospital meets high standards regarding a woman’s preferences, and the distinction allows expecting mothers to make an informed decision about where to go for their birthing and maternity care needs.

“King’s Daughters Medical Center’s selection by WomenCertified as one of the Best Hospitals for Patient Experience in Obstetrics differentiates it from other choices in the area,” explains Delia Passi, CEO and founder of WomenCertified, and former publisher of Working Woman and Working Mother magazines. “Women have many choices when it comes to maternity care and they set the standard for customer service. Women’s Choice Award recipients have demonstrated extraordinary service in meeting the needs of women and their families, and represent the smart choice for women.”

Hospitals qualify for this highly selective annual list based on an in-depth proprietary scoring process. The scoring incorporates a national, standardized survey of patients' perspectives of hospital care reported by the U.S. Department of Health and Human Services (Hospital Consumer Assessment of Healthcare Providers and Systems) and an analysis that weighs criteria identified as the most important to women for patient satisfaction. Additionally, the scoring incorporates WomenCertified’s in-depth research on customer satisfaction among women, including a joint study on customer satisfaction by gender conducted with the Wharton School of the University of Pennsylvania. Hospitals were also screened based on clinical criteria.

“Recognizing the best hospitals for obstetrics nationwide that are women-friendly and align with women’s identified preferences is important to our mission at WomenCertified, where women help other women with tough, consumer decisions,” Passi concludes. “Most importantly, when a woman sees the Women’s Choice Award at her local hospital, she’ll know the hospital values her experience as a critical component of her and her loved one’s care.”

About WomenCertified®
WomenCertified®, the voice of female consumers, awards businesses and brands based on consumer experience. WomenCertified represents the collective voice of women so they can help each other identify businesses that deserve our loyalty and referrals. WomenCertified awards businesses and brands that meet a higher standard of customer experience the Women’s Choice Award. The Award is based on surveys of tens of thousands of women, as well as research conducted in partnership with the Wharton School of the University of Pennsylvania on what drives the consumer experience for women vs. men, which led to the development of the Female Consumer Satisfaction Index. Visit http://www.womencertified.com.