Morrow Wilson’s new novel about the TV industry is “delightful and full of truth” (Eliot Freemont-Smith) and “exactly the way it was” (Henry Morrison). 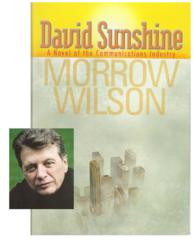 It seems hard to believe in this day and age when Dr. Phil regularly brags about his show’s staff of 300, but only four of us put together a talk show that often made the front page of the New York Times above the fold

David Sunshine, tells the story of an innocent young man whose first job out of college is as the first associate producer of a famous pioneering TV talk show.

“The so-called Golden Age of Television was drawing to a close,” says Morrow Wilson. “But there were still some live primetime shows, live daytime game shows, all the soap operas -- and the important programming decisions and decision-makers were all still in New York. There was no PBS and the man everyone thought of as the great white hope of quality television was David Susskind.

“It seems hard to believe in this day and age when Dr. Phil regularly brags about his show’s staff of 300, but we put together a talk show that often made the front page of the New York Times above the fold the Monday after our Sunday night broadcasts, that featured guests such as Harry Truman, James Thurber, Marlon Brando – people who almost never appeared on television – and we did it with Susskind, his producer, a secretary, and me.”

The novel takes it's hero through his gateway disillusionment with his first job and carries him into the through-the-looking-glass world of a time when TV sets were black and white, when there were only three networks, and when even the Chairman of the FCC referred to television as “a vast wasteland.”

“It was the goofiest first job anyone ever had,” says Morrow Wilson, “and the quickest post-graduate course in the nutty reality of the television industry. That world was so crazy that just telling what happened makes you laugh, probably because it is the only way to cope.”

Morrow Wilson went on to become an independent producer, an advertising executive and finally the production chief of the CBS Cable, a television network of real excellence. But in time he gave up his life behind the scenes to become an award-winning actor who has been in over a hundred New York stage productions, prime-time and daytime TV, feature and independent films, and many commercials. He is the widower of the oft-wedded actress Rue McClanahan, a marriage that she says in her autobiography “lasted longer than all her other five put together.”