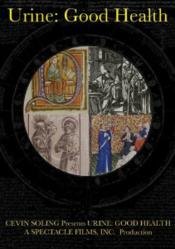 “You really don’t need a diagnosis if you’re sick [...] you just drink your urine, and that will cure it”, claims Michael Maloney, New York City Fire Department Captain

Whether they’re practitioners of Ayurvedic medicine, Christians compelled by Proverbs 5:15 which commands the faithful to “Drink water from your own cistern, running water from your own well”, or alternative medicine advocates who dress the practice in a more scientific vernacular, there is a significant minority of people worldwide who drink to their health from cups of their own urine.

In the film ‘Urine: Good Health’, documentarians Cevin Soling and Eli Kabillio investigate the history of urine therapy practices, interview its modern adherents and advocates, explore the question of urine’s alleged medicinal qualities, and delve fearlessly into inquiries that many -- when confronted with the topic -- would wonder about, but few would ask.

Urine tastes “like sea-water”, according to one member of a urine therapy support group in Los Angeles, assuring viewers that drinking pee is not at all unpleasant.

“Urine, when it is first voided, is 100% sterile,” according to “naturopath” Dr. Robert Green. As it sits, urine may breed bacteria, and it is then that it takes on the unpleasant smell attributed to alleyways and public restrooms. This “Water of Life”, we are told, is capable of curing nearly anything.

“You really don’t need a diagnosis if you’re sick [...] you just drink your urine, and that will cure it”, claims Michael Maloney, New York City Fire Department Captain in an interview for the film.

“Urine is antibacterial, antiviral, and antiprotozoal -- which means [...] against parasites”, states the author of ‘Urine Therapy - It May Save Your Life’, Dr. Beatrice Bartnett (Chiroprator/Naturopath) who explains that when people are fighting off an illness, antibodies discarded in the urine significantly boost one’s immune system when re-absorbed into the system

But some in the medical community disagree.

There is also controversy within the urine therapy community as to whether it is beneficial or counter-productive to use urine other than one’s own. One urine therapy advocate advises, “If you’re visiting a country where most of the tourists develop dysentery, malaria, cholera, typhoid fever [...] as soon as [you] get to the hotel, ask the healthiest looking bell-boy for a drop of his urine, because he’s already developed resistance against the microbes in the area. His urine is the best vaccine [...]”

Other urine therapy advocates strongly disagree, believing that one can only expect positive results from one’s own urine.

Urine-drinkers seem united, however, in the idea that the medical establishment is suppressing this ancient “medicine” that threatens the therapeutic primacy of expensive pharmaceuticals.

It’s a controversy that continues to rage on unbeknownst to the general population, one which this documentary sheds light on with unflinching candor, intelligence, and absorbing pacing and cinematography. Urine: Good Health provides an entertaining introductory education to a topic that is sure to make its viewers the life of any cocktail party.