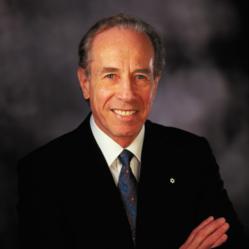 The International Horatio Alger Award is currently presented to one exceptional individual from Canada each year who has persevered through adversity to become a successful entrepreneur or community leader. Mr. Sharp will be honored in Washington, D.C., during the 66th Annual Horatio Alger Awards Induction Ceremonies from April 4-6, 2013.

“The Association is proud to salute Isadore Sharp – a man of exceptional achievement. We are grateful to him for joining in our efforts to enable more and more young people to achieve their dreams through higher education,” said Paul Anthony Novelly, President and CEO of the Horatio Alger Association of Distinguished Americans Inc.

Over the next five decades, Mr. Sharp grew Four Seasons Hotels and Resorts into what it is today – a luxury hotel chain boasting 90 properties in 36 countries. Today, Mr. Sharp remains Chairman of the company, which was taken private in a $3.4 billion transaction in 2007.

“I am truly honored and humbled to receive this award,” said Mr. Sharp.

About the Horatio Alger Association of Distinguished Americans, Inc.
Founded in 1947, the Horatio Alger Association of Distinguished Americans, Inc. honors the achievements of outstanding individuals in our society whose determination and hard work have enabled them to overcome life’s obstacles to achieve success. As a 501 (c) (3) nonprofit, the Association provides college scholarships and mentorship to at-risk students who demonstrate courage in the face of adversity and dedication to pursuing higher education. Since the inception of its scholarship programs in 1984, the Association has awarded almost $100 million to nearly 20,000 students across the United States. To learn more, please visit: http://www.horatioalger.org.