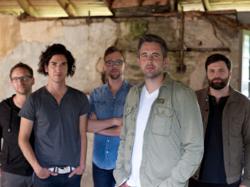 Sanctus Real, the Dove Award-winning Christian rock band that has seen seven radio singles from its first five albums reach number one, with six more in the top five, has been added to the schedule at the Gallo Center for the Arts. The band will perform at 7:30 pm on Thursday, May 16.

Sanctus Real is comprised of Matt Hammitt (lead vocals, guitar), Chris Rohman (lead guitar), Mark Graalman (drums), Dan Gartley (bass) and Pete Prevost (guitar). The band is best known for such hit singles as the U2 cover "Beautiful Day,” "Everything About You,” "The Fight Song","I'm Not Alright,” "Don't Give Up,” "We Need Each Other,” "Forgiven" and "Lead Me.”

Their album “Fight the Tide” won a 2005 Dove Award for Modern Rock Album of the Year. “Run” is the band’s most recent album, released in February.

Performing with Sanctus Real will be JJ Heller, a San Jose native whose faith-based country-folk songs remind people of such mainstream artists as Jewel and Alison Krauss. Heller has had two Top 20 hits, "Your Hands" and "What Love Really Means."