After the success of The Dirty Weekend last year Mud Runner plan to do it all over again! 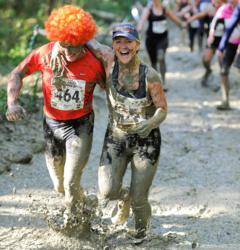 Mud Runner Oblivion is returning as the Dirty Weekend at the end of June 2013 at Eastnor Castle. Mud Runner Oblivion is a tough somewhat brutal 10km run with a mix of obstacles, some natural and some manmade. Mud Runner is one of the original and biggest mud runs in the UK, its growth mirrors the current insatiable appetite for this type of grueling running event across obstacles, through swamps, rivers and mud pits.

The Dirty Weekend is staged over a whole weekend on 29th & 30th June. Adventure runners, fun runners and charity fund raisers can chose to run in one of the cross country races or if they’re mad enough complete both races and receive their Dirty Weekend memento. There is camping too for those that fancy a night under the stars chilling round the fire pit listening to the band.

The course is set in the stunning Deer Park on Eastnor Estate and boasts some of the best tracks in the country. It is normally used by Land Rover as a testing ground for their vehicles and provides a great mix of mud pits, steep climbs, thick gooey mud and some inhumane obstacles.

There is also a Junior Mud Run which comprises of a 5km run with some tricky obstacles to tackle. The race is open to 5-14 year olds and can be run by parents too. The race offers the older more competitive children a tough chip timed race to prove themselves on with the younger family groups have a fun very muddy run. The junior runners can also enter both races and get their Dirty Weekend memento.

Entries are now open and details of all the Mud Runner races are available on http://www.mudrunner.com.